In a series of interviews with candidates in next month’s federal election, the Times sat down with Michelle Taylor of the NDP. 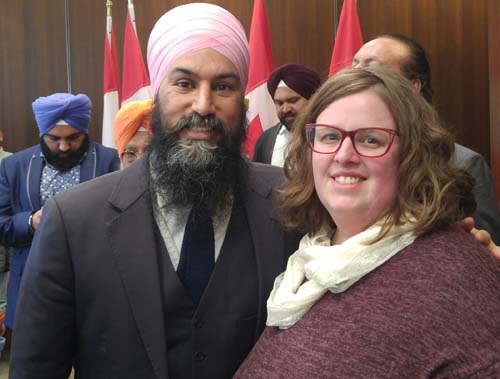 NG Times: The NDP have been usually connected with urban issues. In a riding like this, which is primarily rural, how does the NDP fit?

Michelle: The things that the NDP are running on are a benefit to absolutely everyone. I’m living in a rural setting in Athens and there are investments that families like mine desperately need, and I know that many families in the area do too: pharmacare, dental care, vision care. Before my husband was able to find a job that had benefits, we just didn’t go to the dentist, because we couldn’t afford it. What the NDP is running for touches on everybody, whether you’re urban or rural.

NG Times: What can you appeal to in a riding that has been overwhelmingly Conservative for so long?

Michelle: That is tricky. I’ve talked to a lot of people who say that they’ve always voted Blue because parents, grandparents, or whoever, have always voted Blue. And that is frustrating, because people are literally voting against their own interests. They are voting for a party that is going to do nothing for them. I just try to frame it as trying to find middle ground. I ask them what’s important to them, what sort of things they feel are lacking in their life or their community, lacking in our country. Then I tell them how the NDP would address that, specifically. I encourage people, in every election, to actually take a look at the choices before them. Parties change, candidates change, leaders change. Make sure that what you’re voting for really meshes with your values, with your priorities. And it’s ok for that to change from election to election.

NG Times: Is that something you can get across to people, when they have that traditional approach to voting?

Michelle: Sometimes you can and sometimes you can’t, it’s very frustrating. Whether it’s Conservatives, Liberals, Greens, or even some NDP supporters, the leader could literally do anything and they’d still vote for them. I tell them: don’t you want your candidate to deserve your vote? Why are you just giving it away? Don’t you want to find out what they’re actually going to do to help you? It’s about accountability, which everyone, I hope, thinks is important, and not anything partisan.

NG Times: What about North Grenville, specifically, the second largest municipality in the riding?

Michelle: Money needs to be spent there, outside of the boundaries of Ottawa. We need to be promoted in terms of jobs, of tourism, and money definitely needs to make its way to our area as well. Affordable housing is an issue. I’ve talked to so many people who are finding it a struggle to find somewhere to live. People should be able to live where they want, to be able to get a job, to be making a living wage. They should be able to have their medications covered, to keep themselves healthy. What the NDP is running on is certainly focussed on everybody, and that would include folks in North Grenville.

NG Times: How do you separate yourself out from the Greens, both progressive parties.

Michelle: The Greens are interesting. Whenever anybody thinks of the environment, they usually think of Green, purely because of the name of the party. However, if you actually peel back the layers of their policies, they’re not as progressive as they portray. I don’t actually consider the Greens to be on the Left. I find that they have more in common with Liberals or even Conservatives. For example, on the environment, I find that the NDP is even more progressive than the Greens, more responsible than the Greens. I think people really need to do their homework, to know that where your vote is going is really what you want to vote for.

NG Times: Do you think that the apparent disillusionment with Justin Trudeau will help those who don’t want to vote Conservative to go for the NDP?

Michelle: A lot of that disillusionment comes down to what the Liberals didn’t do with electoral reform. People who put themselves into the ABC camp, Anybody But Conservative, who don’t necessarily want to vote Liberal, but do because of their views on strategic voting, who feel backed into a corner to vote Liberal or not vote at all, shows how desperately our country needs electoral reform. Strategic voting doesn’t always work out the way you expect anyway. The voting system that we have now is clearly not working for us. The NDP has promised to put forward electoral reform, if we form government.

I really hope people start voting because of hope, and not because of fear. If we keep flopping between Liberals and Conservatives, we aren’t going to move ahead. Those two parties are never going to put forward electoral reform, because it keeps rewarding them. I really hope that people change that system and commit this year for finally voting for something different. And, you know what? If everybody does that, we’ll get it.