Kemptville and District Home Support Inc. held their third annual Seniors BBQ last Saturday in Maplewood Park in Oxford Mills. KDHSI Board Chair, Bill White, greeted the large crowd and introduced members of the KDHSI Board, and Wayne Vachon, President of the Kemptville Lions Club, sponsors of the BBQ. Executive Director, Susan Smith introduced visiting dignitaries, Steve Clark, MPP and North Grenville Mayor David Gordon, who, in turn, introduced Councillors Jim Bertram (“the oldest man on Council”) and Councillor Donovan Arnaud. It was a great co-operative effort, with the Lions Club supplying the BBQ, Grenville Mutual bringing the dessert (delicious butter tarts), and music supplied by Mel Benton and Don Watkins, with a country/bluegrass tone, and by Gail and Jerry Osborne, from the Kemptville Lions Club, genuine Newfoundlanders with a down-home sound.

Susan’s remarks emphasised that June is Seniors Month, and the theme this year is “Living Your Best Life”, something she believes everyone at the BBQ was doing. She noted that the Lions Clubs International were celebrating 100 years this year, and the Kemptville Lions would reach the age of 60 in January. Grenville Mutual had been in business for 125 years, so KDHSI had a bit of ground to make up, having been in service for 36 years in North grenville. However, she said, “watch us keep going!”.

Steve Clark distributed Canada pins in recognition of Canada 150, and, as he said, stole Mayor Gordon’s line about North Grenville being Paradise. The Mayor entertained just about everyone with his remarks, as usual, before heading off to look for more butter tarts. Saturday was also the United Way’s Day of Caring, in which they were working with Proctor & Gamble from Brockville. Three P&G staff members were on hand at the Maplewood BBQ to volunteer and help out, and they were both welcome and a great addition to the event.

Another beautiful day in the Park, another great get together for seniors and friends, and another example of North Grenville community at work. The Wishing Tree of Maplewood Park 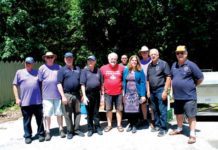