A group of business owners have come together to look at the possibility of creating a Business Improvement Area [BIA] in Merrickville. A BIA is a group of local business people who join together to organize, finance and carry out physical improvements, and promote economic development in their area. It is legislated through the Municipal Act, and it has many rules, regulations and procedures that it needs to follow. Every business and property owner within the footprint of the BIA pays a levy based on their MPAC assessment, and, therefore, has a say in creating the budget and outlining what projects the BIA takes on each year.

“What a BIA brings to Merrickville is long-term sustainable funding for things like streetscape, signage and promotion of events and businesses,” says Anne Barr, owner of Nana B’s bakery on Main Street.

Right now, the Municipality of Merrickville-Wolford pays $12,000 for streetscaping and general maintenance in the Village every year, which is taken out of the general tax levy. It can be argued that this is not fair for people who live in the rural areas of the Municipality, who don’t see the benefits of streetscaping in the Village. “Part of the reason for a BIA is that the people who benefit from the service should be paying for it,” Anne says. “As business owners, we have the opportunity to pass that BIA cost on to the customers, rather than putting it on the shoulders of the tax payers.”

There has been some concern among business owners about how much a BIA would affect their tax levy. Joan Spencer, owner of the Sidecar Café and Chair of the BIA temporary steering committee, assures that the financial impact would be minimal, and worthwhile for BIA members. As an example, she estimates that with a budget of $25,000, her own levy for her property on Main Street would only be $200 per year. “When you think of how many businesses and commercial buildings there are, you’re not going to be paying a large amount,” she says.

Another concern that has been raised is the ability of a BIA and Chamber of Commerce to co-exist in the municipality. It has been pointed out that a BIA and Chamber have different mandates and roles within a business community, and that there is no reason why they would not be able to work together. While a Chamber of Commerce is meant to facilitate networking, to educate and advocate on behalf of its members, a BIA is a much more of a “bricks and mortar” type of organization, which focuses mainly on the beautification and maintenance of municipally owned areas within the BIA’s footprint.

Having a BIA could free up the money that the Chamber is currently using for things like flags, signage, and village maps, to be used for networking events and promoting the wider range of businesses in Merrickville-Wolford. Merrickville-Wolford CAO, John Regan, has worked with many Chambers and BIAs throughout his career and says it is a rarity that they have an issue co-existing. “I have seen very good examples of BIAs and Chambers working together,” he says.

To set up a BIA, there is a prescribed process, with a formal presentation to council, and letters going out to everyone affected. Once the letter stating the intention to set up a BIA is received, the recipient has 60 days to send in any objection in writing. If over 30% of people vote against the BIA, it does not go ahead.

The current goal of the temporary steering committee is education. They are trying to get in touch with all the businesses and landlords to let them know what a BIA is, how it works, and how they will be affected. “We want people to be able to make an informed decision,” Joan says.

One of the ways they are hoping to spread this information is through a public meeting at the end of June. They have invited the executive director of the Ontario Business Improvement Area Association, Kay Matthews, to come and speak to the public about BIAs and their role in places like Merrickville. Joan says they will also be able to present the proposed footprint of the BIA at the meeting, as well as a sample budget to give people a concrete idea about how much they may be paying each year.

The steering committee is coming at this project slowly and cautiously. They want to do their due diligence and make sure as few feathers are ruffled as possible throughout the process. If all goes well, they are hoping to have a BIA set up in the Village sometime next year. 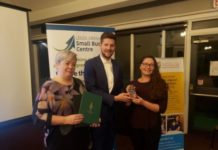 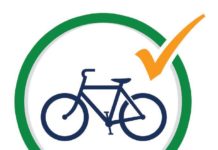