It was, as usual, quite a sight in Blockhouse Park last weekend, as an entire settlement of eighteenth century vintage sprang up in rows of tents and stalls. Men in military uniforms of various kinds, with a predominance of British red, as well as a number of women in period dress, walked purposefully through the camp. There was a strong First nations presence, and flutes could heard playing everything from military marches to the Celtic tunes of Turlough O’Carolan. Stalls containing many different artifacts drew up the large crowd of visitors to the camp, fascinated by the goods and items on display.

The event was put on by the Merrickvile & District Historical Society, under the leadership of Michael Whittaker, who was also dressed in his finest colours. After the official opening ceremonies, with Mayor David Nash and Society President, Ann Martin, the summer season was well and truly under way.

See a short video of the event at ngtimes.ca 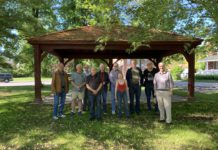