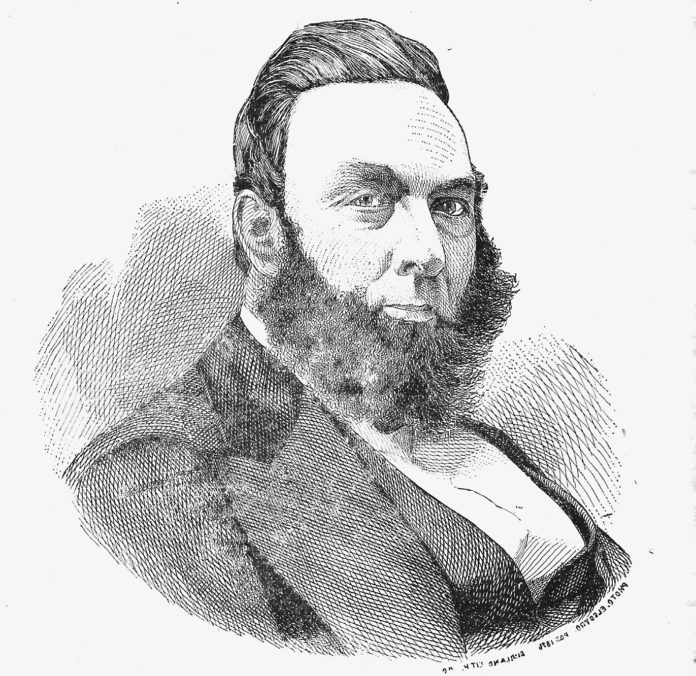 Francis Jones is one of the most tragic figures in the history of North Grenville, a man who rose to high political office in his community, a successful businessman and professional. But he ended his life in dire financial straits, alone and almost forgotten. The saddest part of his story is that, in all likelihood, his fall was the result of his own actions and character.
The Jones family settled on a farm just outside the hamlet of Oxford Mills in 1832. Edward and Rosanna Jones had moved from the Townland of Ballykillane in County Carlow, Ireland when Francis was 17 years old. The Jones family was a well-off and respectable family of immigrants.

Francis, it is said, worked as a school teacher for some years in the 1830’s and 40’s, though it is unclear where he had a position. But, in 1840, he qualified as a Provincial Land Surveyor, and he quickly built up a prosperous business in that field, with his brother, Edward, joining with him on government contracts to survey new townships in the north and west of Upper Canada. His success allowed him to become involved in property around Oxford-on-Rideau Township, and especially in Kemptville, where he not only owned a number of properties, but, in 1847, built a fine stone home and store on the corner of Clothier Street East and West (now Sanders) Streets. The building still stands, the only real legacy of Francis Jones.

For the first decade, Francis seems to have prospered. His store was used by a number of successful businesses, including the firm of Averell & Hooker, and the first newspaper in the region, The Progressionist. Francis was also giving public lectures on a variety of topics, including Orangeism, and astronomy. He had a number of apprentices in his surveying company, some of whom went on to highly successful careers outside of Oxford-on-Rideau. In 1855, he held a remarkable draw, a raffle, for “104 prices consisting of stores, houses, and lots, valued at $8,390, [which] were offered to the successful ticket holders. A board of managers composed of prominent people from Montréal, Brockville, Prescott and South Gower was appointed to look after the details of the drawing and to see that Fair Play was given every ticket holder”.

In 1861, Francis was elected member for North Leeds and Grenville, sitting as an Independent, and remained a member of new House of Commons after 1867. He was an active member, and served on a number of important Committees. He was part of the debates that led to Confederation, and was a witness to those historic events as the representative of his riding. He was a supporter of John A. Macdonald’s Conservatives until 1873, when he opposed the government over the Canadian Railway scandal. He had been a member of the House Standing Committee on Railways, Canals and Telegraph Lines since 1867, so he was well acquainted with the issues. However, his stance did not go down well with the voters, and, in spite of the Liberals winning the 1874 election, Francis was defeated. His opponent was Dr. Charles Ferguson, who held the seat for the next 23 years.

But the fortunes of Francis Jones had begun to decline even before his electoral defeat. From the mid-1850’s, he was in debt, his properties heavily mortgaged. In fact, he lost his jewel, the building on Clothier and West, in 1864, when he defaulted on a mortgage. Two years later, he was living in a hotel room. In 1873, he was trying to get his creditors to make arrangements to stave off bankruptcy, which would have resulted in him losing his seat in Parliament. Some creditors were unwilling to oblige him, as they seemed to think he had obtained the loans fraudulently in the first place.

He returned to surveying work to earn a living, but he was found to have overcharged the government on some contracts. In 1883, he was listed as defaulting on government survey work to the tune of $6,000 – a very sizeable sum. He had been reduced to giving public lectures again, but he never regained the social and commercial position he had once held. When he died, unmarried, in 1887, he was remembered in his community as “a unique character and in many ways a clever man. The latter days of his life were very much clouded by financial difficulties. From whatever point we may view Francis Jones, as a politician or as a man, his memory will always be respected in Kemptville and at the time of his death the greater number of those who had been opposed to many of his ideas forgot the politician in the man”.

It was a sad epitaph for a man who had known the heights of business, political and social life.