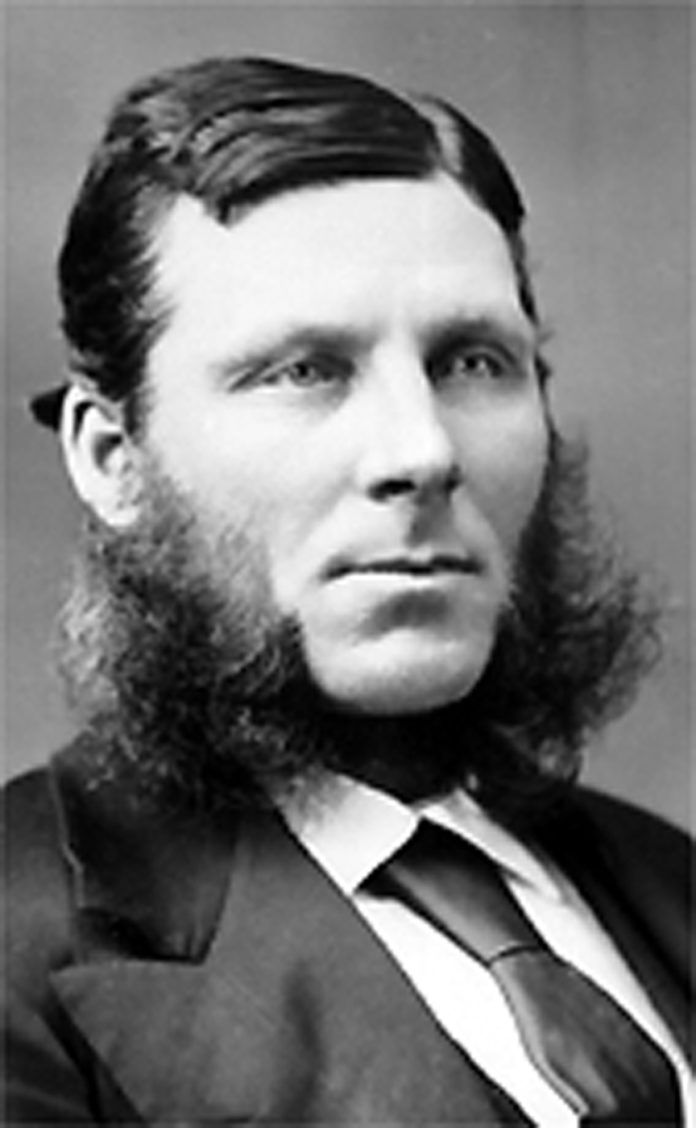 In this series of men and women from North Grenville who had an impact beyond the borders of their community, Charles Ferguson is a little unusual. Unlike others, he did not travel across the country to make a contribution to provincial or national life. Nor did he rise to national prominence in his field, or achieve widespread fame for his accomplishments. Charles Ferguson lived most of his life in Kemptville, serving his neighbours as a doctor and friend. But his wider contribution came during his time as Member of Parliament for North Leeds and Grenville between 1874 and 1896, a total of 22 years, 3 months, 27 days.

Charles Frederick Ferguson was the son of Robert and Elizabeth Ferguson, who emigrated from Ireland in the early 1830’s and settled in Kitley Township, where Charles was born and raised. He attended Smiths Falls Grammar School, and went on to Queen’s University to study medicine. He graduated in 1859, and immediately moved to Kemptville, where he opened his practice, remaining there for the rest of his days.

He married Elizabeth Bell, sister of Robert, both of whom are featured in this series, and the young couple found grief and joy in their children. Seven were born to them, but only three survived beyond their parents. Two died as infants, and two sons died as young men. Their surviving son, G. Howard, became Reeve of Kemptville and Premier of Ontario, another one of the Ferguson clan profiled in this series.

Charles built up his medical practice and mentored a number of young doctors who continued to serve the community over the years. He and Elizabeth lived in various homes on Prescott Street before settling down in the stone house on the corner of Clothier and Rideau Streets. The warmth and affection with which Charles was held in the community is made clear in his obituary, where we read that “he was accounted a member of nearly every family in the district”.

To his friends and neighbours, he was simply known as “The Doctor”, and Elizabeth and Charles had a very strong commitment to those with whom they came in contact. The attic of the home on Clothier Street was equipped with a number of beds to accommodate passing tramps needing a place to stay. One man apparently stayed thirteen years, had his life changed completely, and became a preacher. This sense of public service was called upon in 1874, when the sitting member for the riding, Francis Jones, another Kemptville resident and also featured in this series, crossed the floor of the House and opposed the sitting Prime Minister, Sir John A. Macdonald, because of his policy on railways. Charles was chosen to represent the Conservatives against Jones in the election, since he was well known as a fervent supporter of Macdonald, Confederation, and the National Policy.

Howard Ferguson’s niece once told an interviewer that, in Charles and Elizabeth’s house, the Holy Trinity were God, Queen Victoria and Sir John A. Macdonald, “though not necessarily in that order”. Charles won the election, but it was appealed by Jones and had to be run again. But Charles prevailed once more, and so began his long career on Parliament Hill. Although he never made it into Macdonald’s Cabinet, Ferguson was very close to the Prime Minister, who visited the Ferguson’s at their Kemptville home on a number of occasions.

Charles was responsible for having the South Branch dredged to allow boats to travel up to Kemptville from the Rideau Canal, and was repeatedly selected as Conservative candidate, unopposed, at election time. In the 1890’s he made a trip by the new Canadian Pacific Railway as far west as Manitoba, after which he reported to Parliament in a three-hour speech which was later published and circulated in the thousands in Canada and the United Kingdom. It was said, however, that the quiet doctor was not the real politician in the family: that it was Elizabeth who really had a passion for it, and it was probably from his mother, and not his father, that young Howard caught the political bug.

When he retired from politics, Charles continued to work for his community, serving on Council, as well as on the Board of Education, where he sat for forty years. Dr. Ferguson continued to take care of the people of North Grenville into his seventies. In the winter of 1909, he was called out to help a woman about to give birth. Another doctor had refused to go because the family could not afford his fee. Ferguson left his bed, did his duty and returned to sleep. He never woke up.

A last word comes from his obituary: “With many warm friendships such as it is given to few men to achieve, with few antagonisms and having the respect of all, this broad-minded, active, manly man has concluded his life of great usefulness. We shall not soon see such another”.