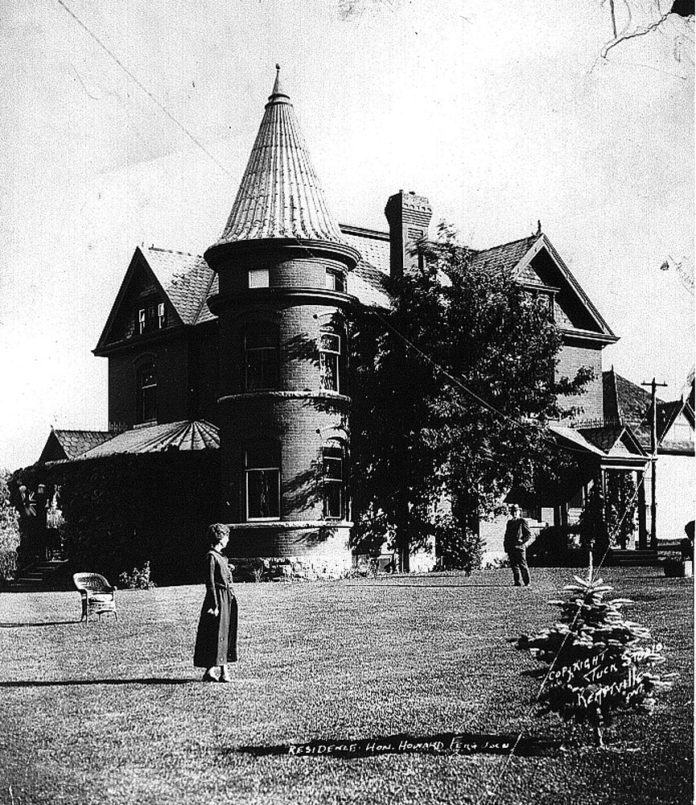 This lovely house is a reminder of Kemptville’s past. In 1844, John Clothier sold 9 acres of land to John Rath. This property covered all the land on the west side of Prescott Street from Van Buren south to Holmes Street (which then ran off Prescott Street) and back to where Blossom Road and Orchard Drive are today. The Rath family built a home on the land and lived there for almost sixty years, until the 9 acres were sold to Robert Jackson in 1901. Robert Jackson was born near Heckston, but went to California where he made his fortune. Coming back to Kemptville, he built himself a fine new mansion with the money made in California, complete with tower and extensive orchards and gardens, and he carried on the farm established by the Raths. He didn’t stay long, however. In 1907 he sold the property to G. Howard Ferguson, M.P.P., a native of Kemptville who had served as Reeve of the Village in 1900-1902. In 1923, he became Premier of Ontario, a position he held until 1930. He then went as Canadian High Commissioner to London until 1935. During that entire period, this was his home. He sold the property in 1939, and, after 1958, the land was sub-divided and developed. The Blossom Road development as it was originally, was built then. But the house remains, a reminder of Kemptville’s Premier. The picture shows Ferguson and his wife in the gardens in the 1930’s.