Over the years, Grahame’s Bakery has become the single most relevant business in the entire riding of Leeds Grenville, Thousand Islands and Rideau Lakes (LGTIRL) for Conservatives. At no time was this more obvious than this past Friday morning, when Conservative Party of Canada LeaderAndrew Scheer  came to Kemptville. He came to support party candidate Michael Barrett in his bid to win last Monday’s federal by-election. Logically, his first stop in the riding was Grahame’s.

Unless you see the sign for the bakery, the building that it resides in might just appear to be a residential home on Clothier Street. However, despite the fact that co-owner Rick Grahame lives in the front of the building, the back of the building has become a legend in the community for the baked goods it provides and the many well-known Conservative politicians it has hosted over the years.

Andrew Scheer has been elected to represent the Saskatchewan riding of Regina-Qu’appelle as their MP four times (2006, 2008, 2011, 2015). In 2011, at the age of 32, he became the youngest ever Speaker in the House of Commons. On May 27, 2017, he narrowly defeated Maxime Bernier to become the Leader of the Conservative Party of Canada after the resignation of former Prime Minister Stephen Harper. The Leader of the Opposition was born and raised in Ottawa, but moved to Regina after meeting his future wife, Jill Ryan, and finished his B.A. at the University of Regina.

Upon arriving at the bakery with little fanfare, Andrew proceeded to literally greet and shake the hand of every one of the forty or so people who were in attendance outside the bakery. He posed for several photos with supporters, along with candidate Barrett, and was introduced to Barrett’s wife and children. After successfully working the outdoor crowd, the party leader ventured inside the bakery to meet several other people, including co-owner Rick Grahame (Rick’s sister Debbie Wilson is the other co-owner and was unable to attend). Rick answered a number of questions about the business and even let Andrew try his hand at pulling some baked goods out of the wood-fired oven that Grahame’s is famous for.

After about 20 minutes spent inside, the Leader of the Official Opposition came out to a cheer from the assembled supporters and, after a few more photos, proceeded to have a brief media scrum in front of television cameras with media outlets CBC, Le Devoir and CTV in attendance. The NG Times even asked a question about whether a Conservative federal government, if successful in 2019, would commit to helping fund the expansion of County Road 43 here in Kemptville.

Judging by the reaction on the faces of the supporters that came to see him, it was a very successful visit. Andrew Scheer was likable, well spoken, appeared genuinely happy to be here, and took time to speak with anyone who wanted his time. It appeared to be particularly memorable for local resident Jane Kinnear, who was meeting him for the first time. Part of the job of politicians is to be able to connect with voters, and Andrew Scheer certainly seems to have no trouble with that part of the job. 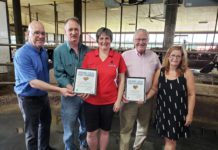