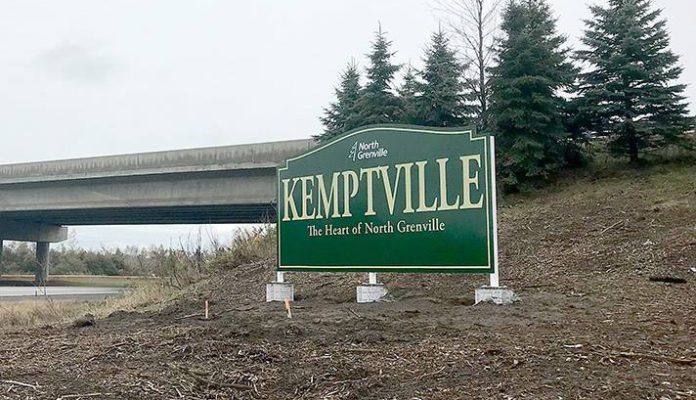 Two weeks ago, we brought you a story on the two new destination signs which have been erected on the 416, informing passing motorists that Kemptville is nearby. A number of comments had been posted on social media, both pro and contra the signs, which, in addition to the name “Kemptville”, also contain the description: “The Heart of North Grenville”.

Feelings on that phrase seem to depend entirely on whether you live in Kemptville or not. Residents of the “Heart” seem to feel that the whole debate is silly and a fuss about nothing. This is precisely what annoys everyone else. Those from outside the “Heart” were upset that tax money was being spent, once again, to benefit the urban area, while others asked why Kemptville was not the heart of the municipality. The debate on-line has continued along similar lines ever since, with one or two interesting points arising from the discussion. One concerns the location of the signs, or, at least, the location of the sign on the southbound lanes of the 416. It is, in fact, invisible to drivers until after they have passed the exit ramp for Kemptville at County Road 43. It seems to say, “you have just passed Kemptville”, rather than “welcome to the Heart”. This does seem to cancel out any chance of luring passing motorists to visit the town.

Another point being made is that there are already two signs indicating the location of Kemptville between the Rideau River bridge on the 416 and the exit ramp to 43. One notes that Kemptville is just 8 kilometres away, and the next states that the next exit is for CR 43, Kemptville, Merrickville, etc. By the time you see the new sign, you’ve already passed Kemptville.

Other residents object to the cost, around $60,000 for the two signs, and includes making, installing and landscaping. Inquiries to the Municipality show that four companies were invited to tender for the job, but only two responded. The Municipality went with the cheaper option, although there is some confusion as to whether either the tender was not clear, or was misread, as the price quoted was meant to be for both signs, but was possibly thought to be for each.

Either way, the signs are there, and no-one is suggesting that they be removed, changed, or otherwise interfered with. For those driving north from the 401, they will be welcomed to Kemptville in good time to stop off for a coffee. For those heading south, they will at least know that they have passed within reach of the “Heart” of North Grenville (wherever that is).