The Ministry of Natural Resources and Forestry (MNRF) has repealed the Provincially Significant Wetland (PSW) designation from a portion of land in Merrickville-Wolford.

When the Village was going through their official planning process, staff noticed that the province had updated the PSW footprint of the Wolford Bog to include roughly 600 additional acres in the Municipality. This included the lands owned by residents Paul Matteau and John Miner, in the north east quadrant of the Village, who claimed there were no wetlands on their properties. “I have a seasonal Dale’s creek that passes through my property, but I do not have any wetland,” John wrote in a letter to council in January. “The creek is normally bone dry from June to September.”

Both John and Paul were concerned that this new designation would affect the value of their property. Merrickville-Wolford Chief Building Official, Randy Wilkinson, confirmed that this was a possibility, as once a parcel of land is deemed PSW, nothing can be changed on the property. “If there is not a house already there, you cannot rezone or get an official plan amendment to allow a use such as a house on that property,” he said.

At the time, the property owners were told by the MNRF that they would have to hire an independent certified evaluator to assess the property on their own dime and then present the information to them for consideration. To throw their support behind their residents, Merrickville- Wolford council passed a resolution asking the MNRF to reverse their decision to designate this area of Merrickville-Wolford as PSW. They also sent a copy of the resolution to Premier Doug Ford, the Ministry of Municipal Affairs and Housing, the United Counties of Leeds and Grenville, the Rural Ontario Municipal Association, and all Ontario municipalities.

On March 27, the Village received correspondence from Minister of the MNRF, John Yakabuski, thanking them for raising their concerns about the expansion of the Wolford Bog PSW and informing them that the Ministry’s Regional Director was carrying out a comprehensive review to determine if the Ontario Wetland Evaluation System (OWES) procedures were followed for the update.

On August 6, the Municipality received confirmation from the MNRF that the OWES procedures had not been followed back in 2010, when the Wolford Bog PSW was updated to include the additional area in Merrickville-Wolford. “Upon review of this file, it was determined that the wetland update in 2010 was not documented as required on the provincial wetland record,” said the letter from the MNRF.

The Wolford Bog PSW has now officially reverted back to its original boundaries, designated in the MNRF’s original OWES evaluation completed in 1982-85. This completely removes the roughly 600 acres from the record and no longer includes the land owned by John and Paul in the north east quadrant of the Village. According to the MNRF, the removal of the PSW designation from these lands results in them being earmarked as “unevaluated”.

John would like to thank everyone involved in resolving this issue, including Minister Steve Clark and Merrickville-Wolford council. “I couldn’t tell you how happy I am,” he says. “It’s nice to know that someone out there listens once and a while.”

According to Mayor Struthers, this matter underscores the issues with land use designations in Ontario. He says the process is supposed to be a partnership between the province and the municipalities; but it is often one-sided. During the AMO conference in August, Mayor Struthers led a delegation to Minister Yakabuski where he discussed his concerns with municipalities and landowners being kept in the dark when it came to land use designations. “The minister agreed that it is not an equitable process,” he said. Mayor Struthers underscored that this was in no way taking land that should be deemed as PSW away from the public record. The decision was repealed because there wasn’t proper evidence to suggest the land should have been given a PSW designation in the first place. “Perhaps the lesson learned out of this is that the Province should be proactive in saying there are some changes, and here is the evidence-based evaluation,” he said. 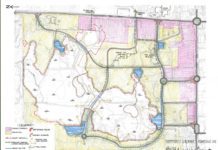