Some residents of Merrickville Estates are concerned about last year’s repeal of the Provincially Significant Wetland (PSW) designation on the lands behind their properties. In early 2020, a few landowners in Merrickville-Wolford found out that a portion of their land had been designated as PSW by the Ministry of Natural Resources and Forestry (MNRF). Property owners Paul Matteau and John Miner were concerned that the designation would affect the value of their land by restricting uses allowed on the property. “I have a seasonal Dale’s creek that passes through my property, but I do not have any wetland,” John wrote in a letter to council in January, 2020. “The creek is normally bone dry from June to September.”

Merrickville-Wolford council backed the landowners by making an appeal to the provincial government to have the designation reversed. As a result, the MNRF sent a letter to council on August 6, 2020 stating that the Ontario Wetland Evaluation System (OWES) procedures were not followed when the roughly 600-acre parcel of land was designated PSW in 2010, and therefore the designation had been repealed. According to the MNRF, the removal of the PSW designation from these lands results in them being earmarked as “unevaluated.”

Resident of Merrickville Estates, Robbie Giles, says that, while he understood the concern of the landowners in terms of the PSW designation on their properties, he is worried what this lack of designation might mean for areas that are indeed wetland, now that they have been deemed unevaluated by the MNRF. “I was concerned that the resulting lack of designation for areas, including the one adjacent to my property, would potentially lead to a potential lack of interest or protection for the wildlife and their habitat,” he says.

Robbie made the choice to move to Merrickville based on the Village’s heritage, culture, and natural features, and he says many of his neighbours feel the same. He has watched as covenants to protect the natural environment in Merrickville Estates have been thrown out the window as the subdivision continued to be developed. “We see lots being totally cleared of trees, habitat where the deer hung out at nighttime and rested are now lots with beautiful homes,” he says. “It’s really tough. It’s conflicting values, between the desire for development and the tax income that comes from it, but do we really value the natural environment that attracts people to places like this?”

Protecting the area’s natural environment is one of the four pillars of the Village’s Strategic Plan, but Robbie believes it doesn’t get as much attention as the other three priorities. He has been trying to engage with the municipality, the MNRF, and the Rideau Valley Conservation Authority (RVCA) to get them to do a proper evaluation of the potential wetlands in the municipality. “When it comes to the future potential development in this area, which council seems to have a strong bias for, I am concerned that the lack of that designation, or an effort by council and those other agencies to do a study, could have a negative impact.”

According to a spokesperson for the MNRF, the Ministry has no plans to undertake an evaluation of the lands. “Protection of wetlands on private land is the responsibility of local planning authorities, and all land use planning decisions and policies must be consistent with natural heritage protections outlined in the Provincial Policy Statement (PPS),” they said in a statement. “Where the significance of natural heritage features, including wetlands, have not yet been determined, the PPS states that an evaluation may be required.  Municipalities may require landowners/developers to undertake studies to determine the presence of any significant natural heritage features, such as wetlands, on properties that are the subject of a planning application. Private landowners also have the option to hire an evaluator who is trained in using the provincial framework.”

In response to a letter that Robbie sent to council outlining his concerns, Mayor Struthers confirmed that the municipality will abide by the Provincial Policy Statement and other legislation that is put in place related to wetlands.

Robbie believes more action is needed from the municipality to protect Merrickville-Wolford’s natural environment. He says it would be beneficial to use the extensive expertise they have on their Environment Committee to work with the County, the MNRF, the RVCA, and any other agency involved to get the lands evaluated. “[I ask] that they look at the overall natural environment and continue their efforts to designate if appropriate.” 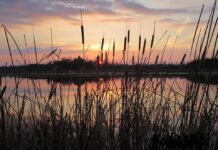 Sustainability – The importance of wetlands

Letter to the editor – Wetlands