In our March 27 issue of the Times, we reported on plans by the United Counties of Leeds & Grenville [UCLG] to install traffic lights at the junction of County Road 43 [CR43] and South Gower Drive. At the time, some residents expressed a preference for having a roundabout at that junction, as it would work better at slowing down traffic coming along CR43, something which they believed to be urgently needed.

However, Director of Public Works for the UCLG, Arup Mukherjee, argued against the idea of a roundabout as “It’s too far out of town.” Under current plans, all the roundabouts planned for County Road 43 will be installed between Highway 416 and Somerville Road in Kemptville. The Director did acknowledge that roundabouts are an excellent way to control traffic, but noted that the UCLG has to take into consideration cost and land availability when it comes to figuring out how to make intersections safer. Installing a roundabout at County Road 43 and South Gower Drive would be more expensive, and they would likely need to acquire more land around the intersection to make it feasible.

That has not lessened the concerns being expressed by local residents. Kristin Chamberlin lives on CR43, between Van Buren and South Gower Drive, and she has noticed an increase in traffic over the past few years, along with a resulting rise in near-accidents:

“I have noticed over the last couple of years the traffic getting busier, the amount of close calls I witness on a daily basis is sickening. Something needs to be done about this before these close calls turn into lives being lost. Cars and trucks travel at more than the 80km/h speed limit, the dump trucks that pull out of the businesses along this road take a while to gain speed, and there are cars slamming on their brakes, pulling onto the shoulder of the road.”

Other residents feel the same, believing a roundabout would be far more effective at slowing traffic than traffic lights. As one man noted: “If safety is the primary concern, then why argue over dollars and cents? A traffic signal is the lazy way out”.

There is no doubt that roundabouts will help reduce speeding, as long as they are used properly; but that is also a concern. Even after having roundabouts in Kemptville for a few years now, some drivers still enter them without pausing, yielding, or even looking to see what’s coming. Others still feel they should stop on the roundabout to let other vehicles in: a very dangerous thing to do.

The original planning of the roads coming into Kemptville from the east has been very poor. Before the 1950’s, there was no CR43. The main road towards Winchester was Van Buren, and the bridge on CR43 over the South Branch didn’t exist. But with the opening of CR43, and especially after the 416 opened, the long straight stretch heading west passing South Gower Drive and on to Van Buren and the 416 seems to encourage drivers to speed. Getting out of side roads along that stretch can be time-consuming and dangerous. Even getting off the 416 heading north on to CR43 is a badly designed junction, as it can be very difficult to see what’s coming along 43 to the east, or coming over the 416 overpass to the west.

Much needs to be redesigned and rethought before we end up with this speedway ending in a roundabout that reduces the road from four to two lanes. Perhaps there’s still time for a rethink before that expansion we’ve been promised for so long actually happens? 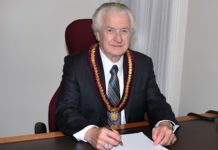