The Municipality of Merrickville-Wolford won the top prize in their population category (2,501 ‑ 7,500) in the national Communities in Bloom competition this year. The awards ceremony was held in Yarmouth, NS on September 28, and Merrickville-Wolford in Bloom Chair, Hope W. Gray, and her daughter, Chelsea, were there to accept the award.

“It was a complete surprise,” Hope says. “It was pretty amazing.” The judges were particularly impressed with this year’s Story Trail Program, run by the Merrickville Public Library and the Merrickville and District Trails Society, as it received an honourable mention during the awards ceremony.

The Village also received the Municipal World Winter Life Award, in recognition of their popular Christmas in Merrickville event. Hope says this win was extremely unexpected, as they were up against several other notable municipalities, including much larger Jasper, Alberta.

This is the fourth year that Merrickville-Wolford has participated in the Communities in Bloom competition, and the first time they have won since 1998. The initiative was brought back to life because a few community members felt it was an important program in which to participate. “The people on our team thought it was important to address and bring to the forefront again,” Hope says.

As in previous years, the Village received 5 Blooms – Bronze, and managed to increase their overall score over previous years. Hope says a big part of that was showing the judges how engaged business and people in Merrickville-Wolford are in maintaining and improving aspects of the Municipality. “We were really impressed with how many businesses and citizens of Merrickville-Wolford embraced the ecological aspect of the competition,” Hope says.

This win is the culmination of the hard work of the Merrickville-Wolford in Bloom team, and the community as a whole, for the past four years. Hope says the award is even more special because the Communities in Bloom organization is celebrating it’s 25th anniversary this year. “On behalf of the National Committee, Judges and Sponsors, we sincerely thank and congratulate the many hundreds of communities and tens of thousands of those involved in the program over the past 25 years,” National Chair Bob Lewis said in a press release about this year’s winners. “Their efforts have helped green our communities and make them better places to live in, to work in….and to visit.”

Hope says that, although they won the top award this year, she believes all the municipalities who participate in Communities in Bloom are winners. Those who participate in the competition benefit in many ways, including increased civic pride, the beautification of the municipality as a whole, and enhanced economic development and tourism. In a world where it is imperative to start focusing on our natural environment, Communities in Bloom highlights the importance of looking after green spaces and participating in the fight against climate change. “The fact that they are participating shows they are forward thinking,” Hope says. “The more communities participate, the better it is for everybody.”

Hope brought the two awards home last week, after what she says was an impressive weekend with true Nova Scotian hospitality. Upon arriving home, she met with Mayor Doug Struthers who was thrilled with the news and expressed his gratitude to the judges and the team of community members involved. “I’m tremendously pleased to offer a heartfelt congratulations to our community team who worked so tirelessly and diligently to capture this prestigious award for our entire municipality,” he says. 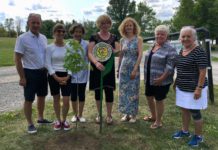 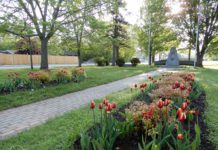