A viable local newspaper only really became possible with the advent of the telegraph from the 1840’s, and the development of good roads and other means of transporting newspapers around the country, or the district. In this part of Canada, newspapers after 1840 quickly became a powerful means of communication, spreading ideas in politics independent of the political elites. Popular writers, like Charles Dickens, promoted their novels through serialisation in newspapers and magazines, bringing literature to the people who had no access to books, whether through a lack of means, or lack of access to bookstores.

While older communities, such as Montreal, had newspapers as early as the eighteenth century, it was this wider access made possible through technology that spurred the growth of newspapers on what is now Ontario. The Ottawa Citizen began as the Bytown Packet in 1845, becoming the Citizen in 1851 when it was bought by North Grenville native, Robert Bell. The Toronto Globe and Mail began as simply The Globe in 1844, and it was in the succeeding decades that the explosion of titles took place.

The railway reached Kemptville in the summer of 1854, and on the very first freight wagon came the first printing press, owned by R. W. Kelly from the Gaspé in Quebec. On January 22, 1855 he published the first issue of the first newspaper in the township. The Kemptville Progressionist was a strongly Conservative publication, determinedly defending the British Constitution and opposing anything that smacked of “Republicanism”. 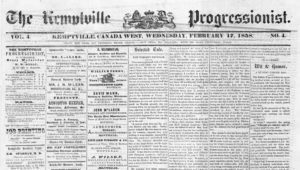 The only copy of the Progressionist that has survived is dated February 17, 1858, and was No. 4 of Vol. 4. In lay-out, it was typical of papers of the time. Most of the front page was given over to extracts from a serialised story, and business cards from local Kemptville merchants, lawyers, hotels and other professionals. Page 2 was also given over to ads, and the news only started on page 3, and contained items from around the world, brought by telegraph to Kelly’s office on Clothier Street. Page 4 reverted to advertisements.

So successful was Kelly at his profession, in fact, that he was invited by some prominent Tories in Brockville to move to the County Capital and start a new paper there. In 1861, he began to publish The British Central Canadian, which was described as a “red hot Conservative sheet”.

But Kemptville was not without a newspaper for long. Kelly’s son, J.H. Kelly, started the Kemptville Observer in the summer of 1861. One again, only one copy of this paper seems to have survived, that of January 23, 1862. It followed very much the same format as the progressionist, but its new items had added spice, covering as they did the on-going American Civil War. The local news items, and the many advertisements for local businesses and events, give the historian a wonderful glimpse of life in North Grenville so long ago. However, the Observer only lasted a few years, and Kemptville was left without a newspaper.

Then, in 1880, came a brief glimpse of a name that would come to be identified with North Grenville for more than a century: The Advance published its first issue in December of that year. The owner of the new paper was S. E. Walt, who had come to the village from Morrisburg. He was based in the Maley building, which was at the corner of Prescott and Clothier Streets, where Rotary Park is today; but for some reason he ceased publication in 1881 and left the area again. Some sources say he was away for just a few years, but The Weekly Advance only reappeared in 1890, after a gap of some nine years. It was then located in the Leslie Block, which is now the parking lot on Clothier street between the South Branch Bistro and O’Heaphy’s. Why there was such a long break between volumes 1 and 2 of the Advance is unknown, but once Walt got restarted, he built up his paper to become a major part of the community’s life.

But North Grenville has always been a Tory stronghold, and Walt was a true Liberal. There may have been dissension in the ranks, because two members of the Advance staff left the paper in 1900 and started their own rival publication: The Kemptville Telegram. In their first issue, they nailed their Conservative colours to the mast and openly ridiculed Walt’s claim that the Advance was an “Independent” paper, rather than a Liberal mouthpiece.

Within a few months, the Telegram had been taken over by a new company, The Telegram Printing Company, owned and run by leading Tories in Kemptville, including G. Howard Ferguson. Walt sold the Advance to two young members of his staff, and the next ten years saw an on-going rivalry between the two papers, both being run by ex-employees of S. E. Walt of the Advance.

These older newspapers were not slow to speak their minds, their owners took stands on the issues of the day, and it was expected that they do so in an honest and transparent way. Not everyone agreed with their views, but it certainly made for exciting reading for the locals on their isolated farms and hamlets, sharing a new sense of community that the weekly newspapers made possible.

Leeds and Grenville Independent, February 4, 1885
With no local newspaper, this Prescott based one had to report on events in Kemptville. Note the reference to Reading Room and a new bridge to be built over the river in the village 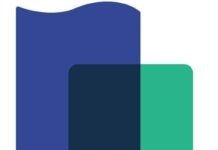