Fifteen year old Petty Officer Second Class (PO2) Wade Claxton first joined sea cadets to broaden his horizons. He was drawn in by the one-of-a-kind opportunity to meet new people, earn experience, and acquire knowledge. Like many cadets in the corps, Wade attended Navy League cadets for two years before becoming part of RCSCC Defiant at the age of twelve. He finds that the corps gives him a strong sense of community, and has allowed him to build many long-lasting friendships. He often takes on leadership roles, and is proud to represent the Department of National Defence. Ambitious and enthusiastic, Wade’s goal is to make life better for everybody.

PO2 Claxton participates in a number of activities, team sports, and competitions, such as biathlon, orienteering, and marksmanship. He is always up for a challenge! His favourite activity is biathlon, since it combines the techniques needed for marksmanship with the more physically demanding aspects of orienteering. He enjoys the time spent training with his team. One of the memories Wade cherishes as a member of the corps’ biathlon team is when he earned a gold medal at a regional competition, and made it to the provincials with one of his teammates. He came back home feeling proud, accomplished, and exhausted. This experience also taught him a great deal about perseverance.

So far, Wade has attended two summer camps: General Training, and Basic Sail, which were both filled to the brim with memorable moments. During the latter of the two camps, the cadets were brought out in the evening to sail the calm waters of Lake Ontario as the sun set. Fort Henry stood to his left side, while cadets marched to the beat of a drum to his right. The beautiful scenery, atmosphere, and weather made for an unforgettable evening.

PO2 Wade Claxton says he has met some of the nicest people at RCSCC Defiant. The words he uses to summarize his experience as a cadet are “brotherhood, community, and fun”.

Wade’s word of advice to new cadets is to step into the limelight and not be afraid of failure or mistakes: it is impossible to learn without making mistakes.

The author of this article, Dilan Yildirim. is 15 years old and is a 10th grade student at l’Academie Catholique Notre-Dame in Kemptville. She has been in the cadets for approximately 2.5 years. She was with the air cadets (706 Snowy Owl) before she moved to Kemptville, and she joined RCSCC Defiant in September 2019. She has an interest in Public Relations, and enjoys reading, writing, visual arts, and listening to music. Of interest, Dilan is writing in her second language! 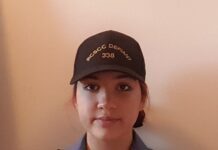 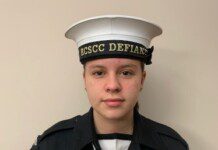 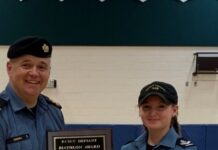