The Kemptville Campus Agroforestry Centre held its annual Sugar Shack Pancake Breakfast on April 2 and 3, which served over 800 breakfasts to guests. The event was held over “Maple Weekend”, which is an event hosted by the Ontario Maple Syrup Producers’ Association to celebrate the province’s maple syrup season, and provide education about the maple syrup production process.

This year, the Campus asked the Kemptville Youth Centre (KYC) to be in charge of running the breakfast, and KYC President Bruce Wehlau graciously accepted. However, Bruce knew that the two-day fundraising breakfast would require more hands on deck than the KYC could provide alone, so he approached the Kemptville Rotary Club (of which he is also a member) to put a team of about 15 or 16 volunteers together using members from both organizations. To Bruce’s knowledge, the Knights of Columbus has run the Sugar Shack Pancake Breakfast in past years, but did not have enough volunteers to run it this year. Whichever organization runs the breakfast is allowed to keep any profits made from the breakfast itself, while the Agroforestry Centre uses the opportunity to sell their maple syrup. With neither the KYC nor the Rotary Club expecting the fundraising money for their budgets this year, the decision was made to donate all profits to aid Ukraine. “We thought, well since it’s found money, let’s do the work and send it to Ukraine,” said Bruce.

The KYC and the Rotary Club did not run the fundraiser alone. Two local businesses pitched in to help. Food Basics provided a gift certificate, and the B&H Grocery Store provided all of the sausages for the breakfast at cost. Bruce relayed that Jim Beveridge at the B&H had wanted to provide the sausages for free, but Bruce insisted that getting the sausages at cost was good enough.

The event itself drew a large crowd, including Mayor Peckford and municipal Councillors, and many of the guests took the opportunity to explore trails in the area. Overall, $3,600 was raised, along with a great many smiles. 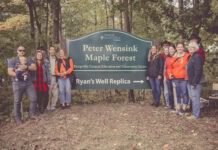 First annual Fall in Love with Maple event a success