The Kemptville Campus Agroforestry Centre hosted a successful Fall in Love with Maple event on September 25 and 26. These events take place throughout Ontario in association with the Ontario Maple Syrup Producers Association (OMSPA). This was the first of its kind for North Grenville, but it will now be an annual event in the community.

The purpose of Fall in Love with Maple is to encourage members of the public to explore and learn about Ontario maple syrup operations. The province-wide campaign ran from September 25 until October 3.

“We welcomed over 500 folks for a pancake breakfast presented by the Knights of Columbus and over 650 folks in total to the sugarbush,” Karen Bedard said to the Times. “Live music was presented by Kemptville Live Music Festival, guided forest tours were provided by registered foresters, and tours of the sugar operation, complete with the evaporator in operation, were provided all weekend by Campus Forester, Jim Hendry. The Ryan’s Well Team was on site by Ryan’s replica well to provide information on current projects, and local forester, Greg Beach, shared displays of historical MNR and forestry memorabilia.”

The event was presented in association with both the OMSPA and On the Bend Sugar Shack, a local maple farm outside of Chesterville.

“On Sunday, September 26, the maple forest was renamed in a dedication ceremony to honour the late Peter Wensink, former Kemptville Campus forester,” Karen wrote. “Peter was a well-respected forest steward and educator. He was instrumental in resurrecting the maple sugar operation at the agroforestry centre working with Frank Heerkens from On The Bend Sugar Shack.”

Frank Heerkens, the current President of the OMSPA, also weighed in on the success of the event, saying, “We had an awesome weekend! It was a great inaugural event, and it was so nice to welcome people from not only North Grenville, but Ottawa and surrounding areas. The visitors we greeted were truly at ease, looking for a space/experience to enjoy. Our guided forest tours and evaporator operation tours were well received, which encourages myself, as an Ontario sugarbush operator, that there is a renewed interest in the industry and keeping maple syrup production and purchase local to Ontario. Look for that Sweet Ontario label when you purchase maple products. We look forward to welcoming everyone back in the spring for Maple Weekend, April 2-3, 2022!” 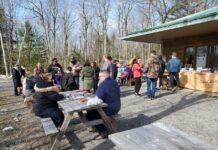