There is a rather unfortunate idea around these days that newspapers have to be “objective, balanced, not opinionated”, an idea that we assume is the norm everywhere. Not only is that not the case, but that somewhat naive idea was not common in Canada until very recently. A fine example of the traditional Canadian newspaper policy can be found in Kemptville, then a separate municipality, independent of both Oxford-on-Rideau and South Gower. The first couple of newspapers in town, “The Kemptville Progressionist” and the “Kemptville Observer”, were around in the 1850’s and 1860’s, and took a decidedly Conservative approach to politics.

Then, in the 1880’s, S.E. Walt arrived from Morrisburg and opened a new publication, “The Advance”, which, after a stop and start beginning, finally settled down to produce a more liberal, if not Liberal, newspaper until Walt sold it in 1901. The new owners had worked for Walt for a number of years, and carried on his policy of favouring one party over another. Of course, this being the riding it is, he was ever careful not to alienate his readers, the vast majority of whom were Conservative voters.

But a powerful political force arose in Kemptville at this time, one G. Howard Ferguson, whose father had been Conservative Member of Parliament for the federal riding for decades. G. Howard himself was a convinced Conservative and a young rabble rouser who got himself elected to municipal Council and stirred things up in a way that was unusual for the sedate municipal councils of the time. Having decided to run for a provincial seat for the Conservatives, Howard found himself facing yet more sedate and ensconced elder politicians unwilling to allow the young pup access to Queen’s Park. The local newspaper didn’t help his cause, so Howard did what Howard was fond of doing throughout his political career: he rearranged things to suit his plans.

In December 1900, a second newspaper had begun publishing in Kemptville, “The Telegram”, which took a more pro-Conservative stance. Within a year, the paper had been bought out by the Telegram Printing Company, the main shareholders of which were G. Howard Ferguson, his wife, and another couple, Mr. And Mrs. T. A. Craig , who were of one mind with Howard in matters of politics and journalism. The editorial slant of the Telegram was clear and open. The Editor, J. Carr Anderson, gave his prescription for a successful newspaper: “character is essential to the success of a newspaper. The Telegram always endeavours to have a hand in the fight and add its quota of opinion and influence in the settlement of the leading questions of the day that are constantly arising and demanding a solution from those who are leaders on the scene of action.”

For a few years, the two newspapers, Liberal and Conservative, fought out their differing opinions in the broadsheets pages of their publications, bringing information and, no doubt, great entertainment to the residents of Kemptville and beyond. Kemptville being a small village, and the surrounding regions not particularly full of a reading public, the two papers often shared the same advertisements, and success was measured in a narrow context. In 1903, for example, the Telegram could boast of its “subscription list, which is the standard of success by which every journal is measured. It now goes to upwards of a thousand homes in this locality, which speaks volumes for such a young publication.” A distribution of 1,000 copies per week, compared with today’s Times, which reaches 9,500 homes. Different times, indeed.

But the fun and games provided to residents by the competition between The Advance and the Telegram did not last very long, in fact. In 1910, a fire seriously damaged the offices of The Advance on Clothier Street, facing the Prescott Street bridge. Whether it was a direct result of this disaster, or simply that the Telegram’s 1,000 readers were too much of a challenge to them, the owners of The Advance sold their newspaper soon afterwards. To add insult to injury, The Advance was bought out by the Telegram Printing Company of G. Howard Ferguson, and the two papers were amalgamated. In a strange twist to the story, the newly combined papers retained the name of The Advance, not the Telegram, and so could boast that it had been in print since the 1880’s.

The newspaper offices moved into newly-built headquarters on Prescott Street, where the paper remained until the current owners, Torstar Corporation, moved out of the building and then out of Kemptville, just a few years ago. The building on Prescott Street, at Number 206, still retains the name “Advance” over the roof, along with the date “1910″.

As the only local newspaper in the Town for many years afterwards, The Advance changed its approach to party politics somewhat, though it continued to favour Conservative policies. This was not difficult to do, as every M.P.P. continued to be a Conservative, and that trend has continued to this day. The era of the defiantly partisan newspaper has largely disappeared now, but it is to be hoped that opinions and stated principles will remain at the heart of all good journalism. But I may be biased. 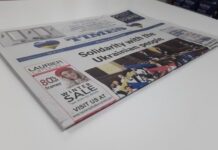