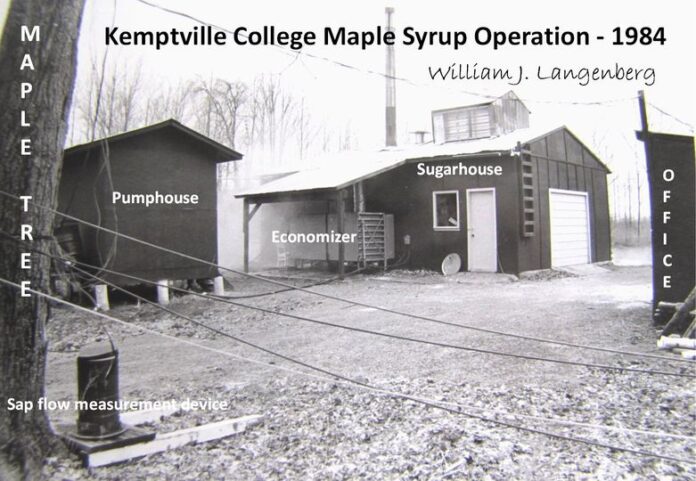 For the first time, I received a copy of the North Grenville Times in my mailbox in the Village of Merrickville this week. I opened the paper, and the first article I read is the renaming of the former Kemptville College Maple Sugarbush to the “Peter Wensink Maple Forest”. My first reaction was: “Why did Council not conduct a background study of this historically well-known educational and experimental sugar maple operation?” Any one of the Council members who grew up in Kemptville would know the history of this Maple Syrup operation and Sugarbush on Bedell Road.

Back in 1970 Jim Purvis, Head of the Kemptville College English Department, started a maple syrup operation, called “KCAT Maple Enterprise”, on Bedell Road. Agricultural Technicians and Farmworkers at the College’s Agronomy Section built the buildings to house the operation. Of course, you can’t get a good crop of maple sap if you haven’t a good Forester on hand to take care of the maple woodlot. Clarence Coons (1941-2006), Forester with Ontario Ministry of Natural Resources in Kemptville, advised us how to manage the 10-acre woodlot. Clarence, who had his own sugar maple woodlot and maple syrup house just outside town on Country Road 18, was indispensable in helping us to increase sap yields. Unfortunately, Clarence passed away in 2006 at the age of 65. Agronomy Technician Earl Hicks, with maple sap in his veins, who hails from Lanark County, and is a 1968 Kemptville College graduate, became the “Sugarbush’s Maple Syrup Maker” for many years.

Agronomy/Horticulture Technician, Bill Hossie (1948-2013), another 1968 KCAT Graduate, became the syrup maker during the 90s. Unfortunately, Bill passed away in 2013 at the age of 65. I joined the College’s “Maple Syrup Enterprise” team in 1975 as a researcher. My task was to start studying sugar- maple sap flow in relation to the weather. I also studied maple sap and maple syrup quality control, which included the detection of invert sugars. Finally, we experimented with prototype sap evaporators, such as Reverse Osmosis and Energy Conservation, in cooperation with the University of Vermont (Maple Proctor Farm) and the University of Waterloo (Dr. Raithby Economizer). Finally, we (Clarence and I) provided the expertise on latest technology, which included marketing Ontario-produced Maple Syrup throughout Ontario and Quebec.

Funded by OMAFRA, MNR, and the OMSPA, Earl Hicks and I started a 3-acre Sugar Maple Tree Plantation on Concession Road in 1978. This plantation is across from the present-day schools. Three-year old high-sugar-producing maple trees were grown by the Ministry of Natural Resources at their Howard Ferguson Nursery by Forester, Alfred (Alf) Campbell (1930-2018). Al and I would discuss these maple trees on the front steps of Al’s house on Prescott Street. These discussions lead to the planting of these unique trees. I walked through the maple plantation the other day and saw it slowly declining in health, as the maple plantation is not being managed like we used to do at the Bedell Road bush.

I am not looking for recognition. My time at the Kemptville College Sugarbush has long passed, and I have moved on. Council could have made a better justifying decision in renaming the sugar bush after some originals employees of the College. After all, Kemptville College was the heart of Eastern Ontario’s Agricultural Sector in Research and Education for close to one hundred years.

Actually, just 100 feet, North-West of this original Sugar House was an important ‘stake’ in the ground, placed there by the Atmospheric Centre of Environment Canada in 1971. This spot was the precise location of the 45 parallel (Indicating the 45 degree latitude). The snow was measured precisely at this spot in the bush, and the amount measured in 1971 was a whopping 71 inches (180 cm). When the trail around the bush was built, this stake got demolished. I tried to find the spot, but that was impossible, due to the changes made. Back in the days, visiting schoolkids would walk around the stake with their teacher, while learning the direction towards the North Pole and South Pole. Kids were pretty excited learning this exercise.

William J. Langenberg, is a retired Researcher Horticulture and Maple Syrup at the former Kemptville College