Legion Branch 212 Kemptville celebrated its Annual Honours and Awards Banquet last Saturday evening at the Legion Hall. It was a full house, with many Veterans and members in attendance with their spouses. Opening Ceremonies were carried out by Chair, Aubrey Callan, and welcomes offered by President Julie O’Brien and Zone Commander Don Swerdfeger. Aubrey introduced the head table, recognized the various retired Veterans present by campaign, invited various toasts and invited Legion Chaplain, Ken Gehrels, to offer a blessing for the food and company, and then the guests were invited to serve themselves in a buffet style supper. The food was plentiful and delicious (catered by Catered Affairs) and enjoyed by all.

Once the meal was finished, we got down to the enjoyable business of handing out the honours and awards. It has been said many times over that it is volunteers that make up the fibre and backbone of a community. This is quite apparent in Legion Branch 212, where everything and anything that happens there is done by volunteers! The monthly breakfasts, dart leagues, weekly and monthly bingos, bartenders, as well as the day to day operations.

Peter Milsom, from the Navy League spoke of the members present and how the Legion is supported by these members. He went on to mention the quiet volunteers that work tireless hours behind the scenes to ensure the Legion remains a strong pillar of North Grenville’s community. He also discussed how the Legion supports the up and coming youth of our area from the standpoint of the Cadets. He then presented President Julie with a plaque for Legion support on behalf of the Navy League of Canada.

Each year at the Legion’s Honours and Awards in April, and again during our Veteran’s Dinner in November, the Cadets from HMCS Defiant are called upon to clean up after the dinner. They serve with pride and distinction and are much appreciated by the many members present. It is a great way to blend the old with the new. It is also a way of mentoring that Veterans can offer the youth who may be contemplating a military career.

The Legion strives to support the children and youth in our community through various bursaries and donations to groups who support our youth. Barb Tobin from KYC (Kemptville Youth Centre) was invited up to receive a cheque for $5,000 for the Youth Centre. This is only one of the many donations that are presented to various groups over the course of a year.

Award pins were handed out to many present, recognising the numbers of years they had been Legion members, and the Past Serving Executive were awarded their medals and bars for their service over the past year. President Julie presented Certificates of Appreciation to the many volunteers present. It was a steady stream of members, and an indication of the tremendous support and positive power that volunteers bring to keep an organization such as the Legion running.

Marguerite Boyer, from the North Grenville Times, was kept busy taking photos as each of the presentations was made. The highlight (for me anyway) was the final acknowledgment of the Past Presidents that were present. These were the backbone of the volunteers! They were the ones that answers the call, “the buck stops here”! Kudos (Bravo Zulu) to all volunteers! 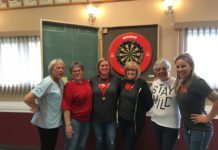