There’s a new gang in town. Their numbers are growing quickly and they’re looking to expand. They started out online, and now they’re getting so big that they’re looking for a physical space to conduct some of their operations. Are you scared? You shouldn’t be, I’m talking about the Kemptville Gardeners.

They started just a couple of months ago as a Facebook group which has quickly grown to 183 members as of this past Saturday afternoon. Speaking of this past Saturday afternoon, the Kemptville Gardeners (KG) hosted their first event at the North Grenville Public Library. Called Seedy Saturday, it attracted approximately 200 people to Downtown Kemptville.

Seedy Saturday was the brainchild of four members of the KG (Emily Kelly, Samantha Macuzzi, Denise Mahoney and Susanne Larner) who, while chatting back and forth in their Facebook group, realized that Kemptville didn’t have a seed swap or seed exchange for people who liked to grow things.

“I was looking for seeds for Heirloom Tomatoes, and then we realized that we couldn’t find any mention of a seed exchange in Kemptville. There were exchanges in other places, so we just decided to start one here” explained Emily Kelly, who was herself a presenter at the recent Rural Summit. So, the four of them got to work and Seedy Saturday was born.

It was obvious, from the number of people who attended, that there is a need and want on behalf of people who like to garden and grow things for this type of event. The group is also looking at branching out to potentially offer a variety of workshops and other programming. From talking with the four women who organized the event, the workshops might just be the beginning. This certainly sounds like one gang that we should all hope grows like a weed! 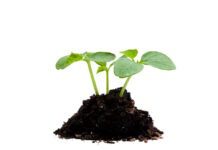 DIRT may lift your mood