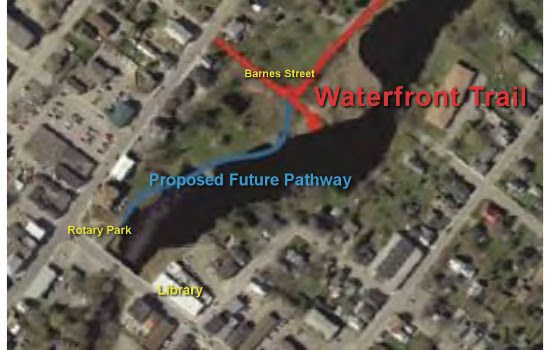 In 2007, as part of Kemptville’s 150 th anniversary, a series of legacy projects was undertaken. One of these, the Riverside Trail, is still being developed, as obstacles to its completion keep cropping up. Recently, the Kemptville BIA’s John Barclay addressed the issue in their monthly newsletter:
North Grenville has a wonderful natural asset in the South Branch of the Rideau River (aka the Kemptville Creek). The idea of walking along the river from Anniversary Park in the Ferguson Forest past Curry Park and Rotary Park to Riverside Park is part of the vision to revitalize Old Town and was part of the rationale to build the Library where it’s currently located by the Prescott Street Bridge. The trail is also the last Special Project from Kemptville’s sesquicentennial celebrations in 2007. Construction was to be completed in 2015 – it has not yet begun.
The project is still on the books for 2017, however. You’ll find it in the budget currently being deliberated by Council. There is one wrinkle however. The proposed construction begins at the foot of Barnes Avenue and ends at Clothier Street East, neglecting to connect the trail to Rotary Park. This essential link to the downtown is listed “Proposed Future Pathway” in official documents.
A multi-use trail along the waterfront should support North Grenville’s Integrated Trails Strategy by building connection between neighbourhoods and facilities as well as promoting physical activity and maintaining community health. Successful downtowns are built on foot traffic. The Waterfront Trail should connect with Rotary Park from the very start of its construction. 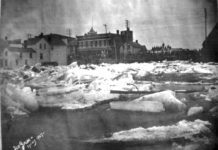 Letter to the editor – creek vs river

Letter to the editor – creek vs river