Well, that last editorial about the whole Kemptville Creek – South Branch River thing really stirred up the letter writers and Facebook posters of North Grenville. Though I imagine that, given the number of “Kemptville Creek!” posts, most of the correspondents live in that locality.

There were a few misunderstandings, I think, in what people were posting. First of all, no-one was suggesting that we spend money to change the name. Nor was it being proposed that the South Branch name be introduced in order to make the waterway sound more “politically correct”, as one poster thought.

To start with, whatever the state of the waterway today, it was once a fast-flowing and often dangerously turbulent river, all the way from near its sources to the Rideau. A look at old photographs certainly proves that, as well as the fact that the stream was able to power two mills at Prescott Street bridge in Kemptville, two more at Perkins Mills (Hurd Street bridge), another two in Oxford Mills, and another in Bishop’s Mills.

The current state of the stream is partly a result of the changes made to the river’s course by these manmade installations. It should also be noted that the dam in Oxford Mills has a lot to do with the flow even today. It is the stretch from that dam to Prescott Street bridge that has become shallow and non-navigable.

Yes, time passes and things like names change. People today feel attached to a name that they have known all their lives, even though their lifetime is only a short stretch of the river’s story. Nevertheless, we have lost a lot of the old attachments, what with amalgamations and expansion. Green and growing we may be, but the river was here before us all, and, Lord willing, will be here long after we’ve gone. Whatever the name, it is still a wonderful part of our local community. Long may it flow. 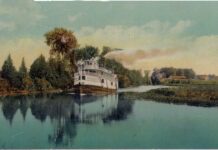 A river runs through it

The early references to the South Branch River