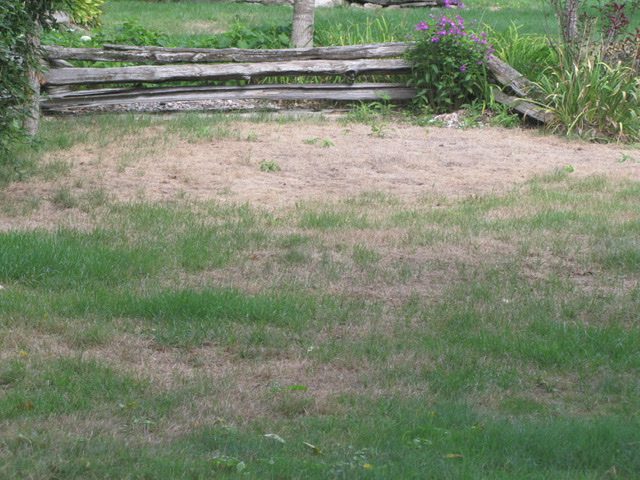 I received several calls from home owners: “My lawn died – What happened?” One home owner in Kitchener-Waterloo sent me a picture of her back lawn. It showed large patches of dead grass. A similar picture was sent to me from a property owner in Vanier this past July. Both backyard lawns, fertilized with a weed and feed fertilizer in May and watered regularly, were surrounded by a solid privacy fence. My first inclination: these two backyards became hot spots, with temperatures reaching well into the high thirties. The high temperatures must have burned the lawn grasses in these two backyards, because lawn grass mixtures consist of cool-season grass varieties and cannot withstand extreme high temperatures very well. I did wonder if the lawn fertilizer could have played a role in the death of the lawn grasses.

I came across a backyard lawn in North Grenville that was not fertilized last May. This lawn showed some signs of drought and heat injury, but did recover remarkably well after a couple of rain falls.

I received a call from a local North Grenville resident this week, who explained that his 2-acre lawn has large patches of dead grass. “I don’t understand”, this resident said, “I had the lawn fertilized by a commercial lawn-care company”. “What Happened?”

I must admit that I am not a lawn expert, but after some evaluation I concluded that granular chemical fertilizers, applied to lawns during the month of May or early June, may have played a role in the dying of lawns. The one thing that comes to my mind, based on my experience, “lawn grasses, when under stress, cannot process lawn fertilizers during periods of high temperatures, as soil micro-organisms are inactive”.

Subsequently, the applied fertilizer forms a salt and draws water away from the grass’ roots. We had 50% less rainfall during June and July. Many days were above 30C during the months of June and July.

Lawn grasses have a shallow root system and are susceptible to drought:

Finally, lawn grasses have a very shallow root system, especially when the lawn was laid as a sod and not seeded, which makes them extremely susceptible to drought.

One solution to prevent drought and heat injury to lawns is to seed a deep-rooting grass variety, such as Tall Fescue with a rooting depth of 100 cm, which makes it more resistant to drought and heat. Another drought resistant grass in the same family is Red Fescue with a rooting depth of 50 cm. In addition, these two grasses are acclaimed sequesters of CO2. One acre of Red Fescue and Tall Fescue sequester 6.9 t.and2.5tCO2/acre/year, respectively, compared to 1.5 t by Kentucky Blue grass. Tall fescue is also resistant to lawn damage caused by the grubs of the European Chafer Beetle.

Finally, do not fertilize a lawn with a granular fertilizer when a heat wave is expected following application. With the global warming we are facing today a lawn application of screened (1⁄4”) compost will prevent burning of lawns as the nutrients are released slowly over time.