by the Merrickville & District Historical Society

Most of us know of the career of Sergeant John Johnston who lived with his family in the Blockhouse while serving as Merrickville Lockmaster. Together Johnston and his son, Mathew, served for over 70 years as Merrickville lockmasters.

As a sergeant with the Royal Sappers and Miners, he had overseen the construction of the eight Rideau Canal locks at Bytown. The Royal Sappers and Miners consisted of skilled miners, stone cutters and masons, blacksmiths, carpenters and construction experts used by the British military throughout the world for construction projects. On the Rideau, their job was to provide skilled assistance and supervision to the outside contractors who were hired to do the actual canal and lock constructions. For general labour, these contractors employed itinerant French Canadian and Irish immigrant labourers, and a considerable part of the supervising job of the Sappers was to keep this potentially unruly crew under control.

But Johnston was not destined to remain in Canada at this time. As the Rideau locks were being completed in 1831, the work of the Royal Sappers here was completed and many of the men and officers serving here were decommissioned. A number were offered the option of returning to England , or receiving land grants and possible employment in the canal area. Many chose the latter. Of the 23 lockmasters initially serving the Rideau, nearly half were former Sappers who had chosen this option. It is not clear whether Johnston had this option but, in any case, in 1831, Johnston, man of duty, instead of remaining in Canada, accepted the posting to Corfu in the Mediterranean.

Following completion of his assignment there and subsequent retirement from military service, he applied for the position on the Rideau which had eluded him, and due to his excellent reputation was promised “the first available position”. He did not have long to wait.

He returned to Canada in 1835 with his thirty year old wife Margret, his daughter Mary Ann and three sons, to become Lockmaster, not at Merrickville, but the isolated and problem ridden Hog’s Back locks and dam, outside of Bytown. The Hog’s Back site was a desolate outpost which did not even have a defensible lockmaster’s house until 1838. Compare this to the views of the already established, bustling and growing village of Mirick’s Mills.

At that time, a man named William Mitchell, a retired Sapper Colonel, was Merrickville Lockmaster. About a year later in the fall of 1836, for reasons unclear, Johnston and Mitchell exchanged positions, Mitchell going to Hog’s Back and Johnston, taking over the much more strategically and commercially important post at Merrickville. In doing so, he became the third holder of the lockmaster title at Merrickville, the first being a carpenter, Thomas Buck, one of the few non-Sappers recommended by Colonel By for a lockmaster position. Johnston, however, was the first to take up residence in the Blockhouse, and it would serve as his base for the next thirty-three years.

From his appointment in 1836, John Johnston served as lockmaster until his death on August 24, 1869. In the Blockhouse museum, you may see his sword and watch, symbols of his proud military tradition, and his punctual attention to duty. Johnston was 78 when he died and his obituary, published in the Brockville Recorder & Times of September 2, 1869, described him as a man “who performed the duties required of him with extraordinary fidelity and singleness of purpose.” But, if you look carefully, you may see his tombstone in the Union cemetery which describes his life even more elegantly and simply. 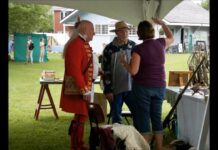 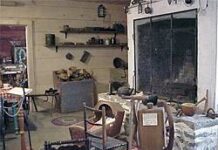