On June 17 and 18, the Merrickville and District Historical Society will be celebrating the opening of the Blockhouse, as well as Canada 150, with a look into the past.

This year, they will be highlighting the history of Canada before Confederation, from pre-contact to the Fenian raids. “Consider it Canada 150 in the rearview mirror,” says Michael Wittaker of the Merrickville and District Historical Society. “There is much more history before confederation than there is after.”

Michael says this year’s Blockhouse festival will be larger than what they have done in the past, with in excess of 80 participants. There will be a military encampment spanning from the period from the 1750s to the 1860s, highlighting the various conflicts in Canada’s history, with heritage interpreters and military re-enactors coming from Eastern Ontario, West Quebec and Northern New York.

A large heritage trade fair will include blacksmiths, gunsmiths, fur traders, quilters, leather workers, and jewelers, as well as toys and games for kids. “We want to celebrate our nation’s history from all aspects,” Michael says.

The official opening of the Blockhouse will be at 1 pm on Saturday afternoon. Merrickville teens, Peyton and Taylor Horning, will be speaking about the history of Merrickville from a youth perspective, and Senator Bob Runciman, who used to represent the riding in the provincial legislature, will be there as a special guest.

The main event will be on Saturday evening, when the crowd will be entertained by Ottawa Valley fiddler Ken Ramsden and the Akhwatsire Dance Troupe from Akwesasne, who will be performing traditional Mohawk dance and storytelling. “This is something we’ve never done before,” Michael says. “We want to put on a good show for people and we hope they come from far and wide.”

The Festival will start at 10 am on Saturday and Sunday in the Blockhouse Park. 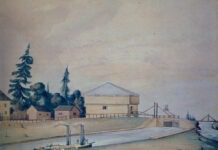