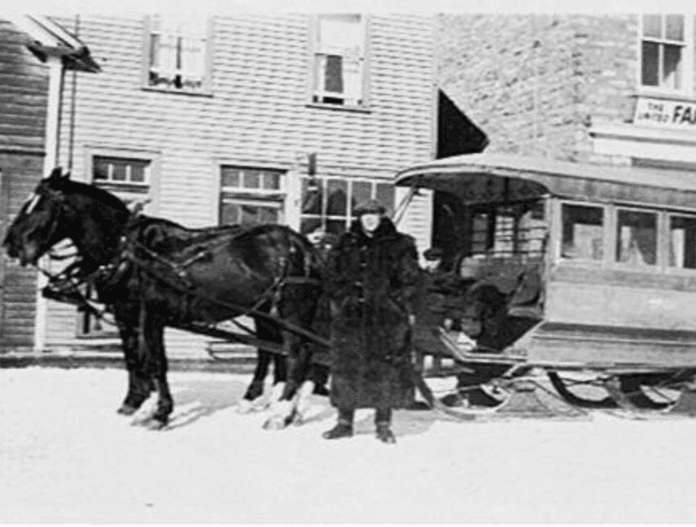 Heritage is people, and this week’s post is rather different. I received a message from Patricia Walsworth last week: “Hi I have a photo of my great-grandfather….Joe Swain…which I think would be perfect for this Thursdays Throwback photo. Joe and Mary Swain lived on Thomas Street in Kemptville until 1976. He was born on Feb. 22 1888, which is why I think this Thursday would be great…his 130th Birthday.”

Brilliant idea, and, what’s more, Joe is the link to the history of the Swain family. He was Patricia’s Great-grandfather, and Joe was the great-grandson of Michael Swain, who left Ireland for Canada in 1841, aged 30, with his wife and three children. Although I never lived in Kemptville, my mother was born there and we visited my great-grandparents every Sunday afternoon until I was a teenager.”

In 1844 the family arrived in Oxford-on-Rideau and moved to Kemptville in 1885. When the present Holy Cross Church was built, Michael helped carry the last stone to be placed in the walls. He died in 1909, aged 97. Patricia’s great-grandfather Joe was 21 at the time and knew Michael well. They, and Patricia, connect the North Grenville of 1844 to today. Patricia says: “I was very close to my great-grandparents…Joe died in 1976 but Mary lived until 1985…died just over 4 months short of her 100th birthday. My grandmother Della (1913-2000) was their daughter. She married George Page who worked for the Kemptville Advance newspaper for many years. My great grandparents house is still there on Thomas Street and three houses away is where my mother was born. The photo is of my great-grandfather, Joseph John Swain who was born on Feb. 22, 1888 and lived in Kemptville until just before his death in July, 1976. He and his wife Mary lived on Thomas Street. Joe served in World War 1. Later in his life, he worked as a crossing guard for school children. He was affectionately called ‘Pops’”.

The photo shows Joe in front on Clothier Street, in charge of a bus. Any information about the bus, the photo, or the others in the picture, would be welcome. There will be more on the Swain family in a later issue of the NG Times. Happy 130th Birthday, Joe!