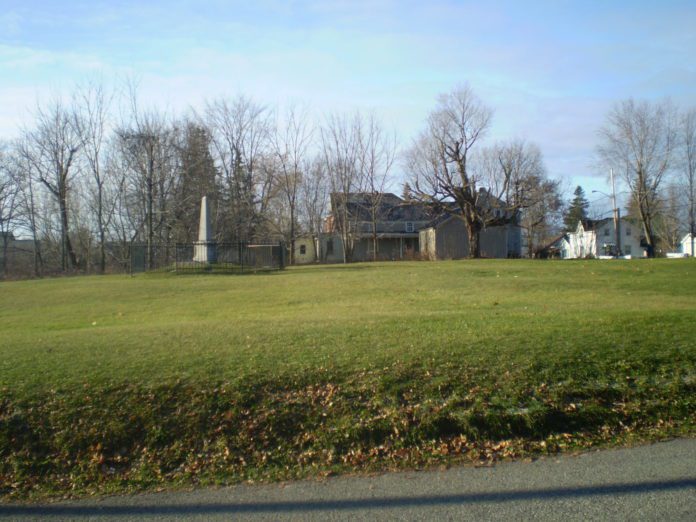 As so often in North Grenville, some of the more interesting and historic locations are now empty sites where once there stood the earliest buildings. This green space on Clothier Street east is certainly one of those.

In November, 1830, Asa Clothier sold lots 12 and 13 on the south side of Clothier Street, to the Trustees of the Methodist Church for £17.10.00. The Methodist congregation had been meeting in various homes before then, but in 1831 they began to build the first church on the site, a 30×40 foot frame building. Opened officially around July 1, 1832, it took another four years to equip the place with a pulpit and to replace the plain benches with pews.

As the congregation, and the village, grew, it was decided to relocate the church to Prescott Street. Early in 1869, a contract was let to E. Fenton to build a brick church at the corner of Prescott and South Victoria Street, now Reuben St. The cemetery that was attached to the old church continued to be used throughout the century. As it became more difficult to maintain the site, the headstones were removed and the obelisk which stands there today was erected, with a small selection of headstones surrounding it, in memory of those early Methodist residents of Kemptville.

In 1954, a transcription of the headstones was made, and found 93 in all. The oldest graves had stones for Hannah VanBury (VanBuren), who died in May, 1813 aged 57, and an older couple – Eunice and Joshua Purmort. Eunice died on August 9, 1813, aged 70 years and 15 days. Joshua did not outlive her for long: he died on October 6, 1813, aged 67 years and 8 months. So many stories lie under the green grass on Clothier Street.