Friends, family and local dignitaries gathered in Curry Park on Saturday afternoon for the dedication of the Waterfront Trail to former municipal councillor, the late Terry Butler.

Terry Butler was a councillor in North Grenville for eleven years. During his tenure, he spearheaded a number of legacy projects including Anniversary Park, the Giving Garden and the Waterfront Trail. Terry’s vision for the Waterfront Trail was to have it run along the South Branch from Riverside Park to Anniversary Park. Currently the 1.3km trail connects Old Town Kemptville to Clothier Street East passing through Curry Park.

Councillor Doreen O’Sullivan began the ceremony, mentioning that she had arrived on her bike using the Waterfront Trail. Although she did not know Terry well, she says he taught her the importance of persistence and patience. “As liaison for parks and recreation, I want to take up that persistence,” she said.

Councillor John Barclay also commented on Terry’s persistence, adding that it was his long-term vision that made the Waterfront Trail a reality. “He first had the idea in 2001 and called it the Kemptville Creek Boardwalk,” he says. “No matter what kind of setback he had, he would persist.”

Terry’s wife Josie Butler was at the dedication and had the honour of unveiling the new Waterfront Trail sign in Curry Park, which honours her husband. “Thank you to municipal council and friends for coming out to this special event for my husband,” she said. 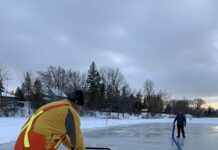 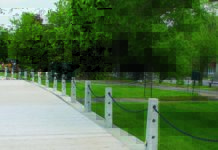