It is reported elsewhere in this issue that the Waterfront Trail, running along the north bank of the South Branch from the Prescott Street bridge to the east end of Clothier Street, is to be named in honour of the late Terry Butler. But that Trail is only part of a planned Walkway that is intended to stretch further to the east and north of Clothier Street, as far as a point just north of the bridge over County Road 43. A Feasibility Study has been prepared, outlining the project and describing the work needed to bring the plan to fruition.

The planned route is called a Terra-Marine Walkway because part of it is on the river bank, and part will be on a special walkway built over the river itself. It is a visionary concept, and uses the practical experience gained by other similar walkways and docks, such as those at the LeBoat facility in Smiths Falls and various locks on the Rideau Waterway system.

The project was first suggested following a Resolution of the North Grenville Council in April of this year, instructing the Economic Development Committee to undertake a review of the Kemptville waterfront and to provide advice on future planning and use of the property. A small sub-committee was established and they have spent the past months meeting and consulting with various parties, including the Kemptville BIA, the Rideau Valley Conservation Authority, and Parks Canada. Meetings to consult with the public were expected, but did not happen.

Although the Feasibility Study presents a very positive picture of the project, it also contains a great deal of caution, considering that the land is owned by the Ministry of Natural Resources and Forests above the CR 43 bridge, and by Parks Canada beyond that point. The land would have to be leased by the Municipality in the long term, and an amazing number of regulations governing habitats, fish, wildlife, erosion, barriers to ice, and flooding concerns are in place and would need to be negotiated through permits and other regulatory arrangements.

Even so, given that the bridges at CR 43 and Bridge Street only allow for the smallest vessels to pass under and access the dock at Prescott Street, the plan seems to suggest that boaters would moor below CR 43 and then use the Walkway to walk to downtown Kemptville to shop, eat at Restaurants, and even stay overnight. The Study’s most optimistic sections state that the Walkway “will allow visiting boaters to visit our community and procure goods and services and contribute to the economic welfare of our community. In turn, the provision of services will produce new economic opportunities for local businesses”.

The letters from MNRF and the Rideau Valley Conservation Authority are only vaguely encouraging, containing, as they do, long lists of things that would have to be protected, provided for, and applied for before anything further could be done to approve the project as it stands. It is clear that there yet remains a great deal of thinking, planning and consulting to be done before the project goes much further.

As it stands, the proposed project schedule lays down that all studies, public consultation and planning be completed by July, 2019, and that the entire work be completed by May of 2024. 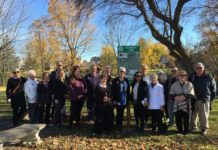