The North Grenville community has been rallying around twenty-year-old Ursa Meyer for the last few months after she suffered a sudden stroke at the end of May. She is now out of the hospital, living in Ottawa with her boyfriend and his family and participating fully in the rehabilitation process.

Ursa says she doesn’t remember much about the days following her stroke. One of her first memories was being moved to the fifth floor of the Ottawa Civic Hospital Campus and waking up to realize that she couldn’t move her right arm or leg. The severity of her stroke and the side effects still didn’t sink in until she was at Élisabeth Bruyère Hospital. “It kind of came in stages for me,” she says. “There was me being aware of how I was now, and then there was how it affects the rest of my life, [which] happened later at Bruyère. That’s when it really hit home for me.”

According to the staff at Bruyère, Ursa’s progress over the past few months has been amazing; but for Ursa it has still felt slower than she would like. She started walking with assistance about one week after she arrived at Bruyère and she can still remember the excitement of being about to move her right arm for the first time. Now Ursa is walking, able to raise her right arm about 90 degrees, and close her hand in a fist and release it part of the way. “Not quite all the way, yet,” she says.

Ursa says the physiotherapist, occupational therapist and speech language pathologist at Bruyère were incredible and definitely played a huge role in her recovery. Her occupational therapist even created an extension to her viola bow so that she could hold it properly with the limited mobility she has in her right hand. “They were really wonderful,” she says. “I made a lot of progress through them.”

Music has played a huge role in Ursa’s recovery and has been a main motivator for her to work hard in therapy. She says it was very hard at first when she wasn’t able to play music at all because it is such an important and integral part of her life. She is very thankful to one of her high school friends who was able to come visit her every day at Bruyère to help her play her viola and to her physiotherapist who always incorporated music in their sessions. “I don’t think I could have been quite as optimistic as I was if I didn’t have the music,” she says.

Overall, Ursa has been keeping her spirits up and working very hard at recovery. She has had her days where she has felt a bit down about how her stroke has affected her life, but overall she is optimistic about her ability to recover. “What happened, happened,” she says. “But I can affect how well I heal.”

Ursa is still enrolled in Music Performance at the University of Ottawa, and is taking one course this semester to see how things go. Originally, she was hoping to go back to school full time; but has realized that she needs to be realistic and take the time she needs to recover. “At one point, I did have the mindset of: I’m going to go and do all my courses despite this stroke,” she says. “I realized a better way of saying ‘screw you’ to the stoke is by recovering.”

Along with the music, Ursa says the tremendous support she has around her has been a huge motivator for her to stay positive and keep up with her recovery. “I’ve got an amazing support system,” she says. “I’ve got music, I’ve got family, I’ve got friends, I’ve got so much good around me. I’ve just got to look at the good. Focus on the victories and everything will work itself out.”

Ursa now has full weeks of appointments focused on therapy, some with private services, and others at Bruyère. She is very grateful for all the fundraising that has taken place in North Grenville to support her recovery. “The community has been so amazing,” Ursa says. “I honestly can’t thank them enough.” 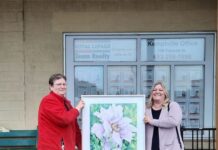 A winner in support of Ursa