Over the years, the Club grew from fewer than a dozen members to a high of over 100. The first President of the New Horizon Club was Jack Pinder-Moss. Our current membership includes Lorraine Maccraken, the longest serving member of the Club, who served two terms as President and took on many other jobs over the years. Joyce Mckay, one of the founding members, who passed away three years ago, was President twice as well as serving in other capacities throughout her years with the Club.

The objects of the Club, according to the constitution, were to further the happiness and dignity of its members and to promote and sponsor, in the name of the Club, such activities as may be proposed and approved by its members. Over the thirty-eight years, the various executive committees elected by members have worked hard to plan and organize a variety of activities for members to enjoy such as pot luck lunches, celebrations of special events throughout the year including Oktoberfest, Christmas, St. Andrew’s Day, St. Patrick’s Day, pancake lunches, theatre trips, speakers on a variety of topics, contests, dancers, and the annual variety show begun 24 years ago with jokes, readings, songs, music, and dances, all by members.

Unfortunately, membership has been declining and it became more difficult to attract what we “older seniors” call “younger seniors”. There are fewer members who feel that that they are able and willing to take on the jobs of President, Vice-President, Secretary, Treasurer, Programme Officer and other roles needed to keep a club like the New Horizons Club active and on-going. For that reason, it was necessary to dissolve the Club as of August 31, 2020, the end of the fiscal year.

New Horizons Club, we will miss you. 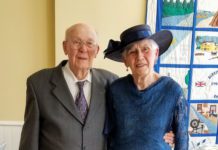