The Upper Canada District School Board received a financial forecast update at its last meeting, and approved the 2018-19 School Year Calendar.

Second Financial Forecast for 2017-2018 Fiscal Year: Superintendent of Business Robert Backstrom presented Trustees with the second financial forecast update for the current fiscal year. At this point in time, Backstrom said the Board’s overall financial outlook remains stable for the balance of the fiscal year. The forecasted surplus of $508,380 reflects a moderate reduction in the anticipated in-year budget surplus when compared with the first financial forecast update presented in January. Estimated adjustments to Grants for Student Needs funding and the creation of 10 new educational assistant positions contributed to the surplus change. Backstrom added the current forecast maintains the Board’s standing for operating within the compliance levels set by the Ministry of Education while allowing the Board to focus on its key goals of student achievement and student well-being. 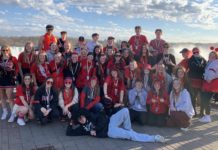 Highlights from UCDSB Board of Trustees meeting