This year was always going to be a fun one for the political animals among us, but it’s turning out to be even more interesting than anyone expected. Quite aside from really disgraceful actions taking place on the world stage, and just looking at the local Canadian scene, we are in for a number of fascinating contests.

We already knew about the Provincial election coming up on June 3, and the municipal one in October. But now we have the added bonus of a leadership contest for the Conservative Party of Canada, which really promises to be a fierce and divisive affair. With five candidates already declared, and another two considering a run, this is a field that will decide the future of the party for some times to come.

And the reason for that is that opposite wings of the party are going head to head, in the persons of Pierre Poilievre and Jean Charest, with the other candidates looking to take advantage of any vote splitting between the two front runners. This may not be the usual topic for an Editorial, but we have to acknowledge that this Riding has always been a Tory stronghold since Confederation, which makes the leadership contest particularly relevant.

In addition, the current M.P. for the riding, Michael Barrett, has been associated with Pierre Poilievre, since his own election to Parliament in December, 2018, and has formally supported Poilievre in his leadership campaign. There is no doubt that Barrett differs quite fundamentally from his predecessor, Gord Brown, in his more ideological stance on various issues. His endorsement of Poilievre includes the statement that: [Poilievre] has the brains and the backbone to lead our movement and to stand up to the leftists”.

The same appeal to the dramatic is expressed by Poilievre himself, when his campaign fundraising campaign includes the slogan: “Sign up now to help me replace Trudeau & restore freedom”. This approach is generating some negative feedback for Barrett online, as people, including traditional Conservative Party supporters, wonder which direction Poilievre and Barrett want to take their Party.

Given the duo’s support for the truckers in Ottawa recently, it is especially interesting to note Barrett’s new role as Shadow Minister for Health, a position in which he could potentially have a role as a future Minister.

“I am honoured to continue serving our community in my new role as Conservative Shadow Minister for Health and as the Vice Chair of the House of Commons Standing Committee on Health, and I will be dedicated to advocating for the health and mental wellness of Canadians,” said Mr. Barrett. He was named Shadow Minister for Health by the interim leader of the Conservative Party, Candice Bergen. Mr. Barrett was duly elected by committee members as the Vice Chair of the Standing Committee on Health during today’s meeting on the emergency situation facing Canadians in light of the COVID-19 Pandemic.

The two men have a track record of stirring things up in Parliament by commenting loudly on any likely scandal that would throw the Liberals, and particularly Justin Trudeau, in a negative light. During the controversy over the WE issue, Barrett even warned that the National Archivist might destroy sensitive documents that would damage Trudeau. That kind of attack on a professional public servant, questioning their integrity and professionalism, smacked of the kind of thing Trump and his coterie indulged in, and still indulge in, to throw mud at their political opponents. Once again, that is not the kind of politics Canadians have been accustomed to seeing in their Parliamentarians, and bodes ill for any future Conservative Government.

The leadership race for the Conservative Party will be a useful indication of whether the party will follow the Republican Party in the U.S. and veer more sharply to the Right than has been the case in the past. Based on their statements to date, it may well be that, far from being Joe Clark’s, or even Brian Mulroney’s Conservatives, Poilievre and Barrett may yet take the party further right than even Stephen Harper. In contrast, Jean Charest represents the more traditional Conservatives, the party of Mulroney and Diefenbaker, with a far greater appeal to unaligned voters, those tired of Trudeau, or simply against the increasing rancour and nasty turn Canadian politics has taken in the last decades.

Poilievre has deep support among his colleagues in the House, but the question is whether that support extends beyond Parliament Hill. And that is the issue for Conservatives generally. They may see Poilievre as a strong, no-nonsense leader of the party, but do they see him as a potential Prime Minister. Do they think he can win a General Election?

Charest appeals to the moderate wing, the Red Tories, and those who fear a move towards a Trump-style politics in Canada. It is thought that the election is a Progressives versus Reform contest, but the other candidates may yet have a pivotal role to play as each is eliminated, or gains traction against both leading candidates. If Poilievre wins, does that give Barrett, and, in theory, North Grenville, a greater role in how the nation is governed? Or does the idea of Poilievre government make Conservatives rethink their party’s identity and direction?

There will be many twists and turns, and much shouting and cheering before the winner is announced in September. And just think: before that, we have the other two elections, and we get to vote in them. What a fun year for politics! 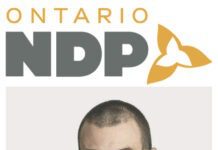