Drivers of gasoline and diesel vehicles saw a huge jump in the price of fuel in the past two weeks, with prices in the region hovering around the $1.82 – $1.88 per litre range locally for gasoline, and even higher for diesel. Unlike small, typical fluctuations in prices which most drivers are accustomed to, the current exorbitant prices hit hard and fast. These price increases are the kind that can cause real hardship for families. The popular website, “Gas Buddy”, which tracks regional gas price information and historical fuel price data, shows that in a span of just over a month, average gasoline prices in Canada soared from about $1.47 per litre to about $1.87 per liter.

As an example, a family spending about $300 per month on fuel in early February would be spending about $381 per month at today’s prices. For families living within tight budgets, the question of where to get the extra money can be a tough one.

No region should consider itself “lucky” to be paying current fuel prices, but there are many regions of Canada paying significantly more for gas than North Grenville residents. Some parts of the west coast, including Vancouver, are seeing prices in excess of $2.08 per litre. Even travelling to the nearby city of Kingston and the surrounding area results in fuel prices about 10 cents per litre more than what one would expect to pay in the Kemptville area.

What is causing these price increases? While there are likely several factors at play, the most significant appears to be the current war between Russia and Ukraine. Russia is the largest exporter of oil in the world, and the value of gas has therefore been impacted by both bans on importing Russian oil in some countries, as well as the increased risk of importing Russian oil for those countries still using it. Even Canadian families who are financially struggling the hardest can appreciate that things could be worse, and it is significantly less perilous to be paying more at the pumps than to be watching one’s country and family destroyed by invasion.

The federal carbon tax introduced by Justin Trudeau’s government has also been partially blamed for rising fuel costs, with many calling for the tax to be lifted, even if just temporarily, to provide relief for struggling families. Some countries have lowered their share of the gas tax already. In Ireland, for example, the government have taken 20 cent per litre off the price at the pumps. Fuel prices are unlikely to return to previous averages any time soon, as the war in Ukraine continues to rage on.

Locally, it is likely that gas station owners will see an increase in fuel thefts from their businesses as desperate people struggle with the choice of stealing gas to get to work. Canada’s 2022 Food Price Report predicted an increase in thefts from grocery stores this year due to rising food costs, and there is no reason to expect different trends for those struggling to pay for gas. Current fuel price information can be found at https://www.gasbuddy.com/. 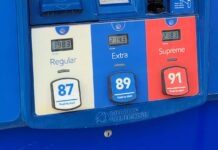 Governments must act when it comes to fuel prices