North Grenville in Ward 6 (Grenville County) of the Upper Canada District School Board has John Palmer and Heidi Piper-Ward challenging three-term trustee Lisa Swan. They are running for one seat amongst 10 elected trustees, one First Nations trustee, and one student trustee.

Trustees in the Upper Canada District represent the concerns of students, parents, and taxpayers in the counties of Leeds-Grenville, Lanark, Stormont-Dundas-Glengarry, and Prescott-Russell: 27,000 students; 4,200 staff; and 78 schools. They have responsibility for a $403-million operating budget, and $65 million for planned capital projects.  By comparison, the budget for the Municipality of North Grenville is $26,022,550, about 5.5 per cent of the school district’s funds.

There are no local contenders for the Catholic District School Board of Eastern Ontario. The incumbent Brent Landon (Grenville County and Elizabethtown-Kitley Township) has been acclaimed, as per an inquiry I made to the board office.

In the Catholic Board, seven trustees and one student trustee have responsibilities for 42 schools, 12,900 students, 890 teachers, and 535 support staff in the same eight counties mentioned above. The proposed budget of $194.3-million, included $147.1 million for wages and benefits, and $35.4 million for operating and capital expenses.

Consideration of school board trustees warrants serious thought, not only for whom to vote, but stepping up to run. Our schools run on hundreds of millions of tax dollars. The Government of Ontario determines the amount included in our municipal tax assessments. 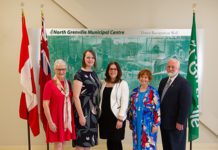