Well, winter continues to wend its way through its allotted time this year with a minimum of harsh reminders of its power. We are having a seemingly average time of it, without too much real cold. Significant storms have been infrequent. Everything is going well in this introduction to 2017. Well, almost everything.
As I speak to people in different parts of North Grenville, one aspect of winter that comes up frequently, and not in glowing terms, is the subject of energy costs. First of all, there is the continuous upward spiral of hydro costs. The imposition of these costs through provincial policy is making life more difficult for Ontario residents these days. For the elderly especially, often on reduced fixed incomes, this is so to the point that many are at risk of losing their homes. Many must reduce expenditures on the basics of survival, such as food. For anyone with even a moderate income, energy costs are a challenge. And, on the larger scale, there is also a problem that our provincial economy is being negatively affected by provincial energy policy. Looking for a good, full-time job with benefits in private industry? Good luck.
As if electricity charges were not enough, our province’s shiny new carbon tax should really cause some pain. The effects of this tax will be seen most quickly at the gas pump, or in heating bills for gas and oil. But, in fact, the effects of this tax will also be seen in food bills and in the price of goods that must be delivered by transport. The effects will be seen in manufactured goods requiring carbon inputs for fuel or materials made from carbon-based products. They will be seen in your municipal taxes. This year, the carbon tax and other sharp additions to the municipal energy bill, are adding just under one percent to municipal costs. And, so far, the municipality cannot really predict how much additional cost will be added as the full extent of the impact of the carbon tax becomes known.
What to do about all this? Well, one can sit back and grumble. Or, the less informed among us might choose to falsely blame those big bad oil companies for the fuel cost increase caused by the carbon tax. Or, as is more usual, one can just do absolutely nothing about these arbitrary government policies.
There is at least one alternative, however. An organisation called C.A.R.P (Canadian Association of Retired Persons) is offering anyone with access to the internet a way of having a voice relative to the matter of skyrocketing energy prices in Ontario. C.A.R.P. has prepared an online petition to give a voice to those who wish to express their anger, frustration and impatience with the highhanded and arrogant energy policies of this province, in particular, exorbitant hydro prices. If you are unhappy about hydro prices, take five minutes and go to the following www.carp.ca/hydro-2.
Follow the instructions. Add your name to the list and give weight to the expressions of concern put forward by thousands of other Ontarians. If you can do more, please do it. But at least do this. By doing so, you will be helping yourself as well as your neighbour. This time, if you CARP, you will be giving strength to your voice that you could not gain on your own! 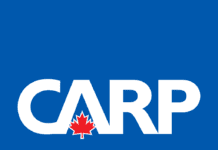 What ‘Back to School’ means for grandparents

What’s the big picture on the carbon tax?