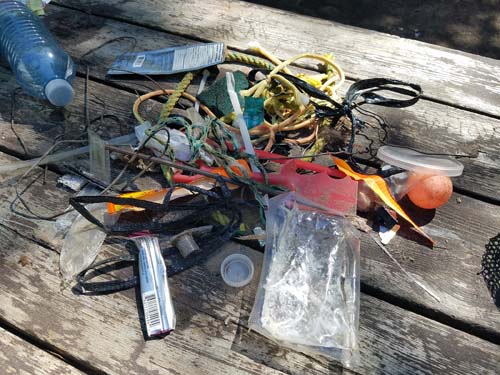 When we think of the impact of human activity on nature, images of plastic conglomerate adrift in the Pacific Ocean, or refuse laden slopes of high-altitude Himalayan mountains probably come to mind. Single-use plastic, in particular, has been recognized for its detrimental impact on the environment. But what about closer to home, in our Provincial Parks? As this camping season comes to an end, I found that the accumulated debris from trash at my campsite was a cause for concern.

Recently, I enjoyed four days of camping at Sandbanks Park. Famous for its beach and sand dunes on Lake Ontario, it is one of the province’s busiest parks. That said, after Labour day, it gets a lot less crowded. Even without a reservation, I still got a great campsite, on top of an ancient sand dune, edged with forest.

It was a beautiful spot to set up a tent, except that the previous campers had left their half-eaten corn cobs in the fire pit with their other garbage. Birds and racoons had strewn this trash around, while scavenging the kernels. It took a few minutes to get the mess picked up and bagged, along with the ubiquitous rusty bottle caps. In the process, I could not help but notice that there was a lot of plastic debris around, also. It was mostly in pieces small enough to slip through the tines of a rake.

A humble start turned into a pleasant stay. The evening temperatures foretold the end of summer, as well as the end of another busy season for the remaining park staff, who seemed ready to transition from serving visitors, to cleaning up and closing down. Only a handful of nearby campsites were occupied. Except for one nighttime occurrence of tortuously out-of-rhythm hand drumming, perpetrated by a small group of bohemian looking twenty-somethings, it was really peaceful.

The relative solitude of the early off-season at Sandbanks, counters its mid-summer image of crowded beaches and full parking lots. From May to August, campsites occupied by large groups, look as if whole shipping containers of outdoor merchandise, destined for big box stores, have just lost their cargo. After Labour day, Sandbanks’ summer campers are mostly gone. As if a parade just passed through, the scattered bits of stuff the park’s visitors leave behind, add another layer to the accumulated debris of many seasons.

Consequently, over the next days, as my footsteps churned up the sand at my campsite, more man-made artifacts kept surfacing. Bread bag ties, straws, caps from propane bottles, polypropylene rope, plastic feet from camp chairs- you name it, it was probably there in the sand. I kept picking it up and adding it to a trash bag. It occurred to me that the campsite, like far away oceans and mountains, was another example of how seemingly insignificant amounts of trash from our individual activities can accumulate into a significant problem.

The solutions available for this issue are partial ones, each requiring both changes in existential attitudes and in practical actions. Park staff will try hard to clean up before the fall, I am sure. Foremost, campers need to take responsibility for cleaning up one-hundred percent of their own trash, all of the time, before it gets spread around. However, we’ve been told this already. Re-instilling a love of Nature, and a sense of obligation for leaving a place in better shape than when we arrived, would help too. But isn’t that what camping is meant to do?

At an existential level, Ralph Waldo Emerson, the American poet and philosopher, wrote that “Art, is a product of the interaction of the human will with Nature.” Given that we have the will to do so, developing an aesthetic sense for our own interactions with Nature would direct us our toward better environmental outcomes. Having an appreciation of the beauty of Nature alone, is not enough to make us act to preserve it. Rather, the sense we need to regain, is one that reflects on the ugliness, or beauty of our own actions toward it.

On a more practical level, end consumers need to be accountable for the proper disposal of waste materials at home, and most importantly, during travels to public areas, where otherwise, trash becomes everyone’s problem and no one’s responsibility. Finally, consumers need to make more careful purchasing choices, which favour well-made goods, made of biodegradable materials, over items made of fragile plastic. Manufacturing industries are naturally responsive to changes in demand.

Regarding the actual scope of the trash problem at Provincial Parks, the example of one campsite can only point to the potential of a trend at other parks. Sandbanks Park is one of the province’s most heavily used. Objects are especially easy to lose in its sandy soil. However, the faster accumulation of debris there may be an indicator of what is happening, albeit more slowly, in the environments of our other parks.

Parks to stay closed until May 31

Letter to the editor – single use plastic