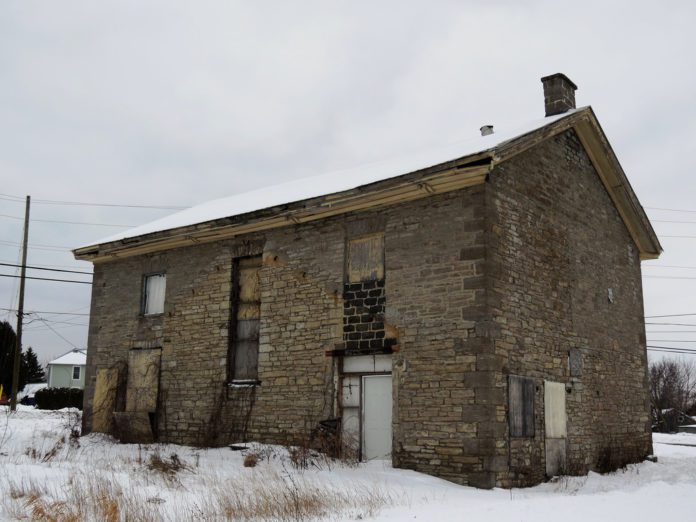 There has been some concern in the Village of Merrickville-Wolford over the old stone building that used to be a Methodist Church. Built in 1855, it is one of the oldest buildings in Merrickville-Wolford, but does not have historical designation. It served its congregation until 1889 when the building which is now the United Church was built at the corner of St. Lawrence Street and Main Street. The building has been sitting in disrepair for many years. Chief Building Official Randy Wilkinson, says it has been empty and decrepit ever since he started working at the municipality almost 30 years ago.

Recently, the owner of the building decided to renovate it and bring it back into usable condition. “All he wants to do is keep it from deteriorating,” Randy says. To do so, he had to clean out mountains of bat guano and pigeon feces that had piled up over the years. According to Randy, the owner plans on putting in a new floor system, rebuilding the upper floor, and replacing the windows and roof. The building itself is in good condition, considering the number of years it has been sitting empty. “The floor slab is in good condition, and there is not a lot of deterioration to the rubble stone wall,” Randy says.

As part of the renovation, the roof of the building has been removed, which has caused several residents to be concerned as the building has been sitting open to the elements for several weeks. Even though it doesn’t have heritage status, it is still considered a landmark by many people who live in Merrickville-Wolford. Randy says the owner expects to have the roof back on by the end of the month and that there is no cause for concern. An engineer has been through the building and there are no structural issues with it at this time.

Randy believes the fact that something is being done with the building is good news. “The idea from the owner is to be as sympathetic as possible to the original look,” he says. The owner has not revealed what his plans are for the building once renovations are complete. An amendment to the zoning bylaw may be needed once the occupancy needs are clarified by the owner.