Merrickville-Wolford Council committed up to $5000 last Monday night for the renovation of an existing downtown washroom to be used as a public washroom in the Village.

The debate over whether or not to build a public washroom in the downtown core has been going on for some time. The Merrickville Chamber of Commerce and the Lions Club have been adamant that a public washroom downtown is a necessity in a Village that survives off tourism and they put together a petition of over 800 signatures to show how much support there is for the project. Their original idea was to build a public washroom and information centre on the municipally owned parking lot on Wellington Street. The Lions Club was ready to put up $10,000 for the project and the Merrickville Chamber of Commerce was looking at how they could cover the rest, as well as the upkeep of the washroom. “We have said we are working on it and would look after the maintenance for the next 2 years,” says Chamber President Karl Feige.

While there are many that are for the building of a new washroom, there are also many who are opposed. Terri Hamway, owner of OhLaDeDa, says he sees loopholes in the Chamber’s plan to look after the upkeep of the washroom and believes that it would inevitably fall to the Municipality and affect the residents’ taxes.

Merrickville-Wolford CAO John Regan confirms this fear, saying that in their estimation it would cost $20,000 for the Municipality to upkeep a stand-alone washroom, which would definitely affect the tax rate. “That’s almost one percent of the tax levy,” he said.
John believes that committing the $5000 to upgrade a current washroom is a good compromise. “This is a great example of council listening to the public and implementing what they’ve heard to the best of their ability.” Council has directed staff to start negotiations with the property owner to enter into a trial agreement for one year, with the possibility of renewal if all goes well. Council has also agreed to put aside $1,200 per year to cover any utilities costs that go over the owner’s base rate, and for overall maintenance to the washroom. It is hoped that the newly renovated and accessible washroom will be up and running by July.

While Terri says he thinks this is a good resolution, the Chamber does not agree. They believe that sinking $5000 into a band-aid solution is not the way to go and they are unhappy that they seem to have been pushed out of the equation. “We have been working hard to try and make this happen,” Karl says.

Although it seems like this issue has been put to bed for now, John says staff is recommending that council ask the economic development committee (charged with looking into the public washroom issue) to carry out a feasibility study for a combined washroom and visitors center in the Village. With more information about how many washrooms they would need etc., council will be able to make a more informed decision on whether committing the resources for a stand-alone washroom/visitors centre would be in the best interest of the Municipality. 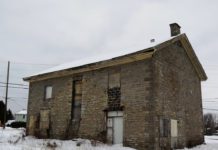