Local musician and songwriter Larry Pegg wants Canadians to consider offering up their vote in the upcoming election to youth. He says, “This election, more than ever before, be a proxy for young people who cannot yet vote.” Voting by proxy is a way of including minors, who are not yet legally given a vote, in the democratic process that will guide the future of our planet.

When Larry lost his 21-year-old daughter Kelly Anne to suicide in December of 2007, he became all too aware of how young people suffer from climate despair. His daughter, like many young people, suffered from the impression that planet earth, its climate and inhabitants, are doomed due to lack of respect for the environment. In 2019, we saw young people all over the world rise up at Climate Marches. This movement continues today, as many of the people at the forefront of environmental activism are youth. But still other youth feel hopeless and voiceless in the face of climate change.

Larry says, “Given the importance of this election as it pertains to climate action and its direct relationship to eco-anxiety affecting millions of young people today, I would like to reinforce this important message and get it out across Canada to help voters know how important this issue is to those who cannot vote.”

Regardless of what mature voters believe, Larry hopes they will consider what youth believe: the political decisions we make now will shape the world that young people inherit. He says, “Mature voters can become a proxy vote for young people. By mature I mean those in retirement, or those close to the end of their long, relatively safe and comfortable lives. Even those with a terminal illness, or undecided or confused voters. It can even mean first time voters who are overwhelmed by the complexity of the platforms. What I’m talking about is a revolutionary way to engage people in democracy. We pivoted for Covid. We can pivot for our children’s future too.” To Larry, this election cycle will mark a pivotal moment for, “climate action or climate inaction, a moment for the history books.”

Proxy voting is not an official process, but a social promise. Larry suggests that, “A proxy voter can ask a young person to come along with them on voting day. They ask them to witness their marking an “x” for that young person’s choice.” This does not have to happen without discussion. “Beforehand, the proxy-givers demographic (grandparent or parent, or trusted friend) can make a dedicated point of listening to, not lecturing to, young people. They should listen to their concerns about climate inaction and then choose to become their proxies.”

Larry says, “In my sleep I’m imagining how powerful that intimate human moment would be. Teaching a young person the power of their protest, the power of voting, and the power of listening, all in one civic gesture called a proxy vote. All of this to help save the world for young people who are afraid today. Older voters were afraid once too. Canadians afraid during the Nuclear missile crisis, during WW2 and prior conflicts. I can’t help but think of the many soldiers who have given up their lives for our young peoples’ future and their right to vote.”

Larry Pegg has been working to bring awareness to the connection between the mental health of youth and climate change. Photo by Hilary Thomson.

Don’t get taken for a spin 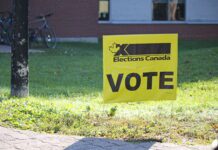