On August 23, 2022 just before 10:00 a.m., officers from Grenville and Leeds Ontario Provincial Police (OPP) successfully stopped three stolen vehicles. This is the fifth stolen vehicle located in Grenville County’s area in two weeks. The first pick-up truck was observed travelling at high speeds along Highway 401 eastbound passing Brockville at around 8:00 a.m. Officers located it as it continued past the Johnstown exit in Edwardsburgh-Cardinal Township and conducted a rolling block to safely stop the pick-up truck and arrest the driver. Officers continued to patrol the highway and located two further vehicles reported stolen, initiating two more prompt rolling blocks. No injuries or damage to any vehicles occurred. Over the past several months thieves have been targeting newer high-end pick-up trucks and SUV’s from Greater Toronto and surrounding areas.

Three females aged 18, 19 and 23 years of age from Montreal were arrested and charged under the Criminal Code with: ·Possessing Automobile Master Key CC sec. 353(1)(b)

Assault with a Weapon

On August 20, shortly before 1:00 p.m., Grenville County OPP officers responded to a disturbance outside a residence on County Road 26 in Augusta Township. Investigation indicated that an altercation occurred between three males which led to the victim being struck with a weapon. The victim sustained minor injuries. Two males from Brockville were arrested and charged under the Criminal Code.

The accused were released and are scheduled to appear at the Ontario Court of Justice in Brockville at a later date.

The OPP is reminding those who sell and dispense prescription medication that when there is any question regarding the validity of the prescription, take the time to conduct due diligence and verify the authenticity of the prescription directly with the prescriber as soon as possible. A systematic approach to screening prescriptions, by checking that the strength, dosage, dose regimen, and quantity are reasonable in light of the information gathered, is encouraged.

If you have any information on the above investigations or any other please contact Grenville OPP on 1-888-310-1122 or Crime Stoppers at 1-800-222-(TIPS) 8477 or submit your tip on-line at www.ontariocrimestoppers.ca. Crime Stoppers does not want your name, you don’t go to court, and you could earn cash reward. 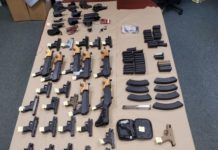