Dorothy Joyce sits in her small, but cozy, room at Bayfield Manor, surrounded by paintings and photos, a room full of memories. One hundred years of them to be exact. Grace Dorothy O’Flaherty (Joyce) was born on October 17, 1917, in Montreal, Quebec, near the end of World War One. Tragedy struck her family when the influenza pandemic of 1918 killed her two sisters, her aunt and her father. Dorothy also caught the flu as a baby, and doctors did not expect her to live, but she beat the odds and survived.

With nothing left for them in Montreal, Dorothy’s mother took her and went to live with her grandparents in Buckingham, Quebec. Her mother started up a dress making shop, and Dorothy spent much of her youth with her grandparents. “I was very close to my grandfather,” she says. “My Grandpa and Grandma were my parents really.”

Dorothy did well in school and was particularly good at math. “There were two boys in school, called Gerald and Ray, and they insisted that girls couldn’t do mathematics. That they didn’t have the right kind of a brain,” she remembers. “That irritated me, so I worked my hardest to beat them in any exams we had and, when we graduated, I beat them.”

Dorothy chose an equally tenacious man to be her partner. Harold Joyce was the son of the local minister in Buckingham, and when they would have him and his family over for dinner, Harold would help Dorothy do the dishes. “He told his parents he was going to marry me,” Dorothy says. “We were both seven.”

Harold was true to his word, and even when Dorothy moved to Ottawa to pursue a higher education and career in business, he kept in touch and visited her when he could. “He would give other men hell if I went out with anyone else,” Dorothy says smiling.

Dorothy and Harold were married in 1941 when they were both 25. They had two sons, however they both died, when children, of cystic fibrosis. Losing her boys was devastating for Dorothy and she credits her husband for holding things together. Through all the grief, she still remembers her boys fondly. “My youngest was a mischief-maker and would make the older one laugh,” she says. “They had a lot of fun together.”

Dorothy remembers World War Two and what it was like in Canada at the time. In fact, she agreed to marry because Harold was planning on enlisting and going overseas. “I was enjoying my job and didn’t want to get married,” she remembers. “But when I thought he was going to go overseas, I agreed.” However, Harold was in a car accident and suffered a head injury that left him unable to serve overseas. “He always felt bad about that,” she says. Dorothy also remembers women being asked to go to work, to replace the thousands of men who had gone to war. “I couldn’t, because I had to take care of my sons” she says.

When the war ended, Harold went back to his job with the Bank of Nova Scotia, and they spent the next several years moving around the country with the Bank. They lived everywhere, from Ottawa, to Sudbury, to Fredericton. Dorothy didn’t work, but stayed busy by becoming active in the community wherever they were. “I have met a lot of nice people in my life,” she says.

When Harold retired, they moved to Kemptville to be closer to their aging mothers, who were both in the Ottawa area. Unfortunately, Harold died, when he was only 63, of a very sudden heart attack. “I just couldn’t believe he was gone,” she remembers. “I just kept expecting him to wake up.” Dorothy still wears her engagement ring, wedding band, and an opal ring that her husband gave her, every day. “My rings are the only things I have left of him,” she says. “They are very special.”

Through all the tragedy Dorothy has faced in her life, she has never given up. Even when life was hard, she has continued to engage; perhaps that is how she has lived for so long. She still gets up every morning and does exercises to keep her body moving. She attends weekly painting classes at Bayfield and has continued to try, even as her eyesight has worsened with age. “I like landscapes, because there are no fine lines,” she says.

Dorothy never really thought she would live as long as she has, especially since doctors did not expect her to live past infancy. Her 100th birthday was full of balloons, flowers, and certificates from Mayor David Gordon, the Governor General, the Prime Minister, and even the Queen. “I’m very lucky,” she says. “My life has been a history.” 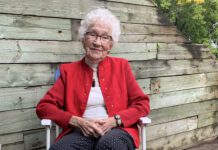