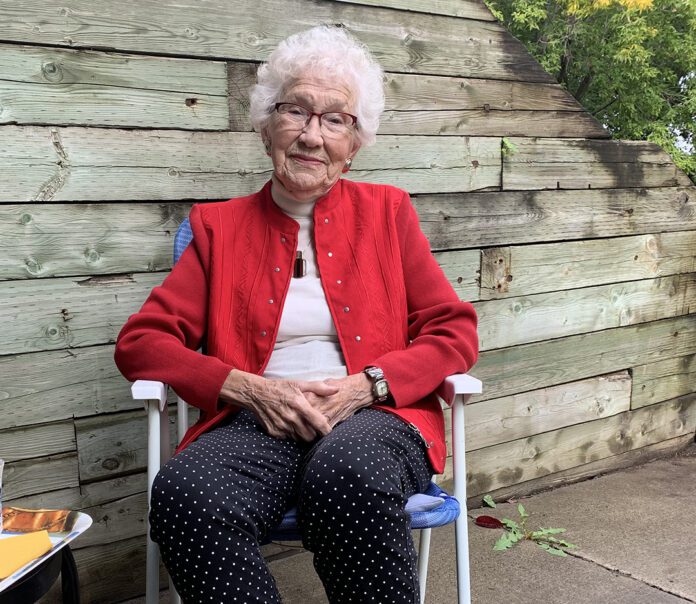 It sure is hard to get a hold of Jean Knapp. A resident of Bayfield Manor, she is constantly on the move, visiting neighbours and keeping her mind sharp with games like euchre and shuffleboard. And she is about to celebrate her 100th birthday.

Jean was born in Wakefield, Quebec, on October 23, 1920, to Christina and Harry Earle. Jean says she was a chubby baby and didn’t start walking until she was 23 months old. “I am still walking today, so that was a good decision,” she says, smiling. “I didn’t need to get up and going too soon, because I would have lots of practice later.”

When she was just ten months old, her parents moved to Kemptville and bought a dairy farm on Hurd Street. The family had Ayrshire cattle, which produced beautiful, full fat milk that Jean remembers them delivering to local households using a horse and buggy. When pasteurization became mandatory in Canada in 1938, her parents sold the farm and bought a blue coal business, where they employed many people. “It was always local people,” Jean remembers.

Growing up, Jean attended elementary school at the old red brick schoolhouse on Clothier Street. She also attended high school in Kemptville; however, she remembers her time there being disrupted significantly by a fire at the school in 1936, and they were moved around to different local buildings like Leslie Hall and Odd Fellows Hall. “They put us wherever there was a spot,” she says.

Jean remembers her childhood fondly. She was an only child, and even though they didn’t have much money, they were happy. Her mother, who lived through the Great Depression, was very careful with every penny they spent, and taught Jean to be prudent with money from an early age. “We enjoyed all the simple pleasures, and there were many,” she says. “There was lots of trust, help, and respect between neighbours.”

Jean met the love of her life, Don Knapp, at a dance at the community hall in Burritts Rapids in 1942. Don left soon after they met to study animal husbandry at the University of Guelph, and Jean worked as a calligraphist at the Canadian Pacific Railway in Ottawa. They were married in 1946 when Don was finished his degree, and enjoyed 71 years together before Don died in 2017 at the age of 95. “He was a handsome lad,” Jean remembers. “I just loved him.”

At the start of their marriage, Jean and Don moved around a bit for Don’s job with the government as an assistant agricultural representative. Their first daughter, Heather, was born in 1947 when they lived in Uxbridge, and their second, Sandra, was born in 1948 in Petrolia, near Windsor. In 1949 Don got a job at University of Guelph’s Kemptville Campus, teaching engineering, and they moved their family back to Kemptville, where they bought an orchard just down the street from where Jean grew up. At first, they lived in an apartment close by; but when the man from whom they bought the orchard died in the early 1950s, they moved into the house on the property. Jean loved being in charge of running Knapp’s Orchard and selling their apples to the local community. “I was really proud of what we were selling”.

In 1985, Jean and Don closed Knapp’s Orchard after 35 years. They did some traveling with friends in their retirement, visiting places like Europe, the Dominican Republic, and Barbados. “I went parasailing in St. Lucia,” Jean remembers. Throughout her retirement Jean also remained a dedicated member of the community. She was an avid bridge player with the local bridge club, and she and Don enjoyed volunteering for Meals on Wheels with Kemptville and District Home Support. Jean also volunteered with the Heart and Stroke Foundation and St. John’s United Church. She always did her volunteering quietly, without searching for recognition. “You do it because you enjoy it,” she says.

Don and Jean continued living in their house until 2009, when they made the move to Bayfield Manor. Jean says it was a difficult decision to move out of their house, which they had worked hard to make a home over almost 60 years. However, they soon felt at home at Bayfield, and she was happy to have more support as Don’s health was starting to deteriorate.

Jean still lives in her two-bedroom apartment on Bayfield’s lower level, and is living life to the fullest. She is adamant that the key to living a long and healthy life is balanced eating, staying active, enjoying friendships, and having a positive attitude. “Attitude is important, and acceptance of what happens,” she says. “Maybe you can’t change it, but your system responds to positivity much better than negativity.” She also believes being kind to those around you, and is vehemently opposed to the word “hate”, which she thinks is used too much. “I always told my girls: don’t say hate. You can dislike, but hate is such a strong word.” Jean always makes an effort to look at the good in each day, especially in times like these, when there is so much uncertainty in the world. “I always just think: enjoy today, because it’s not going to come again.”

Jean’s daughters were planning a party to celebrate her 100th birthday at the end of October, but due to COVID-19, they are planning a quiet family dinner at Catered Affairs. There will be four generations at the dinner, with Jean’s two girls and their husbands, grandchild and her husband, and great-grandchild all there to celebrate the milestone. Jean says she can’t believe she is going to be 100, and that she is very grateful for the life she continues to live. “No wonder I have a happy outlook, and I hope it continues,” she says. “As Don would say: I’ve had a really good life.”

One hundred years of memories