As part of the four-lane widening of County Road 43, the United Counties of Leeds and Grenville is undertaking tree removal from 200m west of County Road 44 to 220m east of Colonnade Drive in Kemptville.

The work will take place in the immediate vicinity of the County Road 43 river bridge between mid-February and the end of March, 2022. Approximately 85-100 common species of trees, such as Manitoba maples, ash and American elm will be removed. An equal number of trees native to the area will be planted to compensate for those being removed. No Species at Risk will be affected by the tree removal. The Migratory Birds Convention Act and the Endangered Species Act state trees can only be removed between September 1 and March 31.

Next year, tree removal work will take place along the County Road 43 right-of-way between mid-February and the end of March, 2023. At that time, approximately 75-80 trees will be removed, including common species and horticultural varieties such as Norway maples, Manitoba maples, white spruce and black locust. Again, an equal number of trees will be planted to replace those being removed.

There are no anticipated road closures associated with this work.

CR 43 bridge to remain an obstacle 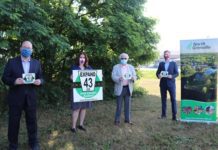