…..sexual harassment, abuses and assaults in the world we all know and live in.
It would be comforting to think that the only women who are propositioned, harassed, abused, and raped by men of power are up-and-coming actresses in Hollywood. Those women have a lot to gain, don’t they? They need a big break to begin a career that they have been working so hard for. Playing along, flirting back, and submitting, will earn them fame and fortune. It would be very comforting to believe that this would never happen to ordinary women. The “Me Too” movement has put a spotlight on an issue that half the population are all too familiar with. It would be very comforting to be able to think that this would never happen in the world the rest of us know, and live in.

Imagine a 16 year old trying to save up for a chance to go to college. She is fortunate and gets a job at a brand new grocery store in a small town outside of Ottawa. She is asked out for a date, asked for back rubs, and asked to show her breasts by the assistant manager every day that she works. She was told that the only reason she got the job was that her legs rated a 10 out of 10, and that’s how the cashiers were hired. She was even shown the job applications with the leg ratings clearly marked. He was an older man, and she didn’t know what to do. She needed her job, and had never been warned about people like him. He gave her the creeps, and she did her best to avoid him. He worked days, and she lost shifts at work because she said she could only work in the evenings. That was the first time she experienced sexual harassment in the work place. That was a teaching that no young women should ever have to have. That men rated their body parts, and had the power to hire and fire them.

This is a much too common scenario in the world today. Whether a woman works as a server, an accountant, a medical intern, or a student, it is all too familiar to us. It shouldn’t take a “me too” movement to shine light on to what most women are already aware of. It shouldn’t be an acceptable norm that women know they must endure this. It shouldn’t be something that our sixteen year old children learn at their first jobs.

This is my first experience, and like most women, there are more. Let’s teach our sons and daughters that they are equal and that nobody in the workplace or elsewhere has the right to make them feel uncomfortable. Let’s teach our sons and daughters that there are laws and supports they can turn to, if needed. Let’s start at home, and not on entertainment tonight. 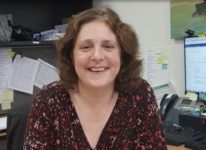 By-standers play a role in preventing sexual harassment at work Can an employee be fired for one incident of sexual harassment?

Is it still sexual harassment when the harrasser is a customer?