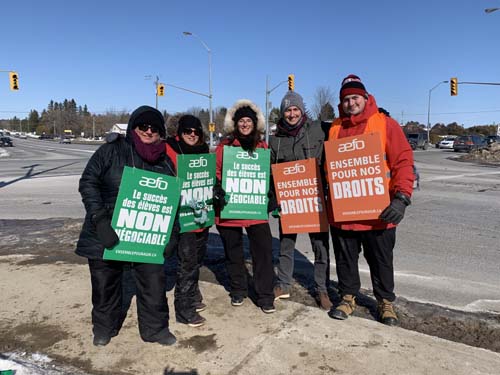 Teachers from all school boards in North Grenville and Merrickville-Wolford participated in the province-wide strike on Friday, filling the sidewalks all the way from the Municipal Centre to the Independent at the Kemptville Mall.

All four teacher’s unions walked off the job together on Friday, with mass rallies planned across the province, including one at Queens Park. Ontario teachers have all been participating in rolling strikes over the past few months, but this is the first time they have all walked off the job together. This caused two million Ontario students to be out of class last week.

At issue for the various education unions are class size increases in high school, mandatory online courses for high school students, funding for special education supports, a hiring regulation that gives supply teachers with more seniority an edge in getting hired for long term occasional and permanent teaching positions, and protection of the full day kindergarten program and staffing. 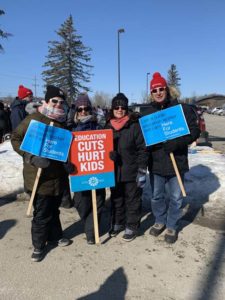 The Globe and Mail revealed last week that benefits funding is also a major sticking point in discussions. The government has advised the province’s largest union, EFTO, that an increase in funding would force cuts to special education teaching supports.

Education Minister Stephen Lecce called the massive strike action “unhelpful”, and said that the government is redoubling its efforts to get negotiated deals with all the unions. “Parents are rightfully frustrated,” Minister Lecce told reporters at Queens Park on Thursday, before the massive strike and protests. “This has gone on for too long.”