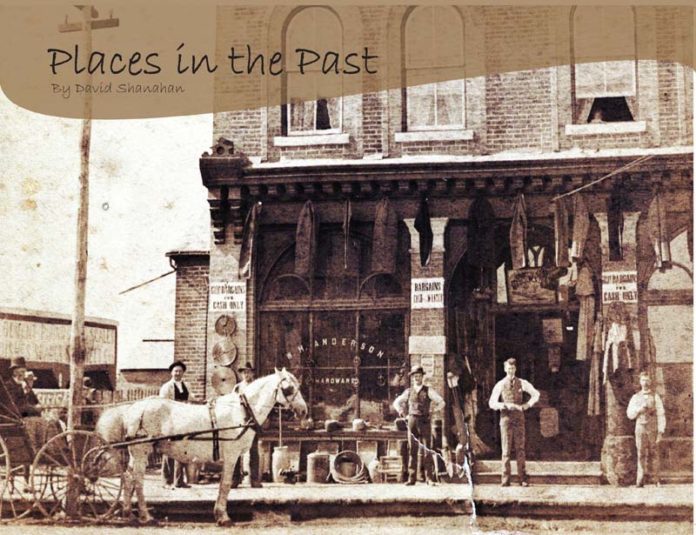 A new book has been published profiling some of the places and people from North Grenville’s past. “Places in the Past” is the latest book of local history by Dr. David Shanahan, following his “Stories from the South Branch” and “Glimpses of the Past”. The new book is a compilation of a series he did on the Facebook page of both the NG Times and the NG Historical Society, called “Throwback Thursdays”, many of which have been expanded, along with new entries, for this book.

“There is an amazing wealth of history in North Grenville, far more than I had ever imagined when I first started researching the field more than fifteen years ago”, said David. Using the resources of the North Grenville Archives, owned and administered by the North Grenville Historical Society, as well as material he gathered at the Archives of Ontario and Library and Archives Canada, David has concentrated this work on the buildings, many of which still stand today, which have stories to tell of the people who came before us and established what became, in 1998, the Municipality of North Grenville.

“The Township of Oxford-on-Rideau was the first in the second line of townships to be surveyed in this area”, David explained. “It was laid out in the same year that Upper Canada, what is now the Province of Ontario, was established as a separate province”.

Much of the knowledge that we have of our past in the municipality comes from the memories and mementoes of residents, and these stretch back as far as the 1930’s. But North Grenville has a history going back to before that first survey in 1791, and much of it has yet to be chronicled. It is David’s intention to continue that work of research and writing, and to, eventually, produce a full history, hopefully in time for Ontario’s 230th anniversary in 2021, or North Grenville’s own celebration of 25 years of amalgamation in 2023.

“Pictures From the Past” was designed and produced by Maggie Boyer for The Brandon Press, and it is the most recent of many books by local authors, in fiction, non-fiction and poetry. A previous history publication, in collaboration with the NG Historical Society, was “School Days Past”, a history of the one-room schools in North Grenville from the 1840’s to 1965, for which David wrote a number of chapters.

Dr. David Shanahan has been an historian since 1975, and works primarily in the field of indigenous history, researching and writing on behalf of the Anishinabek Nation, as well as individual First Nations across the country. He has published a number of books and scholarly articles in that area, as well as many dealing with the history of the Irish in Canada. He has lived in North Grenville since 1994 and, full disclosure, is the Editor and co-owner of the NG Times.

In the meantime, copies of David’s book, 84 pages and full of photographs and information, is on sale for $25 and can be found at the NG Times office, 215 Sanders St, Suite 106, Kemptville. It can also be ordered from the office by calling 613-215-0735, or e-mailing [email protected]

What was it you wanted?