A Kemptville musician reached a new milestone in his career earlier this month when he found out that he has been nominated for a significant music award. Guitarist Darren Michael Boyd has been nominated for the Musician of the Year – Guitarist award by the Josie Music Awards (JMA), based out of Nashville, Tennessee. The JMA is the largest independent global music awards show, and is held at the Grand Ole Opry House in Nashville, Tennessee. Darren explained why the nomination is so significant. “Only 1.8% of the 52,442 submissions have gone on to be nominated, so that’s a pretty big honour in itself!” he explained. 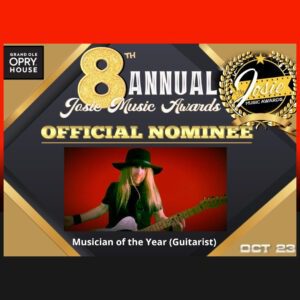 In November, Darren was featured in the Times for the release of his third album, “Last Seen in Canada”. He is now working on his fourth album, but is not ready to provide many details as it is still in the early stages during which creative changes are common. He is hopeful that this next album will be just as well received as the last three. “The response from the previous three releases has been exceptionally positive,” said Darren. “I’m stepping everything up several notches on my upcoming album to be released in October.” Darren writes instrumental music for which he plays guitar. As the owner of Reptile Rainforest in Kemptville, he is known for including animals in his music videos. He answered a question about what it is like to be a musician in the modern age.

“I am a mix of old-school with modern technology,” said Darren. “I still sell CDs, and those physical products still outsell digital downloads on my website. Being that it is show business, I try to release a lot of music videos on my YouTube channel. I love discovering new music that way myself, so I fully embrace that technology! Still, I like getting out there and playing live, reaching real people who are sharing the experience with me and reacting immediately. It’s more gratifying than fishing for likes on social media. But that’s part of our world and artists can definitely benefit, if it’s used strategically and in moderation. Sometimes I feel like I would be a better musician and songwriter if I spent more time practicing and less time trying to promote my music on social media platforms!”

Now that restrictions on live performances have been lifted, Darren is back to actively booking shows. He has recently released two music videos on his YouTube channel that are a good demonstration of his “Spooky Surf” genre.

The JMA awards show will take place on October 23.