A small wood cabin sits on 160 acres surrounded by all sorts of rare plants and trees. Animals of all kinds visit the property every day, birds come and have their breakfast at the bird feeders and bees collect nectar to make their sticky, sweet honey. It is an Oasis, teeming with life, a true garden of Eden, just outside the Village of Merrickville. This is the home of Diana Beresford-Kroeger. She and her husband, Christian, bought the land back in the 1970s, built their house from scratch, and planted many of the rare plants and trees on the property themselves. Diana has a true passion for nature which is deeply rooted in the ancient laws of the forest that she was brought up with.

Diana was born in Ireland, and tragedy struck when she was just 11 years old and she lost her whole family in a car crash. The only reason Diana was not in the car is that she was home, sick. She was taken under wardship and lived with different families for three years. “They taught me everything,” she says. “Magic, the laws of trees, the laws of nature.” She was also taught a lot about life based on old Irish teachings. “Some of the things I was taught is how, as a woman, to respect yourself and protect yourself,” she says. “That was very important for me.”

Diana graduated from University College, Cork [UCC] with a bachelors of science degree in botany and medical biochemistry. In 1965 she received her Masters of Science degree from UCC, and then a fellowship from the University of Connecticut to study nuclear radiation in biological systems and organic chemistry. She chose to leave Ireland and begin a new life in Canada pursuing her doctorate at Carleton University, and then a diploma in experimental surgery, while engaging in cardiovascular research at the University of Ottawa.

It was around that time that she met her husband Christian and they moved to Merrickville. As a wedding gift, the Department of Surgery presented them with an orchard-worth of trees. Diana credits this gift for the beginning of the extensive arboretum and organic garden she called Carrigliath (Gaelic, meaning “grey stone”) that now surrounds her home. “I planted the orchard, and then I started gardening,” she says. “It was very relaxing for me after spending my days in surgery.”

Through her garden, Diana’s passion for trees, plants, and the natural world was awakened. She started noticing people cutting down a lot of trees in her area, with roads going in and houses being built. “They didn’t realize they were building on top of some really rare stuff,” she says. Diana and Christian began what they called “expotitions” (a name curtesy of Winnie-the-Pooh) to classify what was in the area and save what they could. What began as a side project, has now become a full time job. Not only does she look after her extensive garden, she has also written many books and spoken all over the world about her research.

Diana’s latest project is a feature-length film called “Call of the Forest: The Forgotten Wisdom of Trees”, in which she delves deeply into the impact of deforestation on the planet and its contribution to climate change. “My goal is to tell people that climate change is important. It affects the whole of the planet; the weather systems, the ocean, all the growing systems of the world,” she says.

Diana also came up with what she calls her Bioplan, a unique idea that encourages people to develop a new relationship with the environment and, specifically, trees. The deforestation of the planet has contributed greatly to the rise of carbon dioxide levels in the atmosphere. With her Bioplan, Diana estimates that, if each person on the planet plants one tree per year for the next six years, we will have planted enough trees to get the carbon dioxide levels in the atmosphere from 400 to 300 parts per million. “We need 50 billion trees to go back in and it will reduce the effects of climate change,” Diana says. “I’ve worked it out mathematically down to the last tree. It’s a very simple, easy answer”

The film is entirely Canadian-made, something that was very important for Diana. “I wanted the image and answers for this to come out of Canada,” she says. “I’m very protective of that, because I think this is a fantastic country.” The film has been met with a lot of enthusiasm and has garnered the largest audiences of any Canadian documentary since the Canadian Film Board’s inception in 1970. It is based on one of Diana’s books called “The Global Forest”, and she also wrote the script, which she tried to make as simple as possible. “I wanted it to be kitchen table talk,” Diana says. “I think it’s a very arrogant thing in science to talk down to people. That arrogance drives me crackers. I wanted the film to be runaway beautiful, because you’re dealing with science, so you’ve got to get people to listen with honey.”

Diana is now preparing for the European premiers this fall. The film has also been nominated for several awards at the Paris Science Awards this month. It has been showing at select theatres throughout the country and a TV version is available on TVO.ca until September 17. Diana has a unique view on the world, inspired by old Irish teachings and grounded in science. She hopes that, by spreading her knowledge through books, movies, and speaking engagements, she will be doing her part to make the world a better place for the generations to come. “I want young people to be able to have families and live a decent life.” She says. “This is my best way of doing it.” 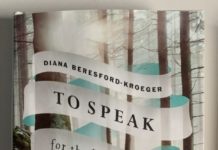